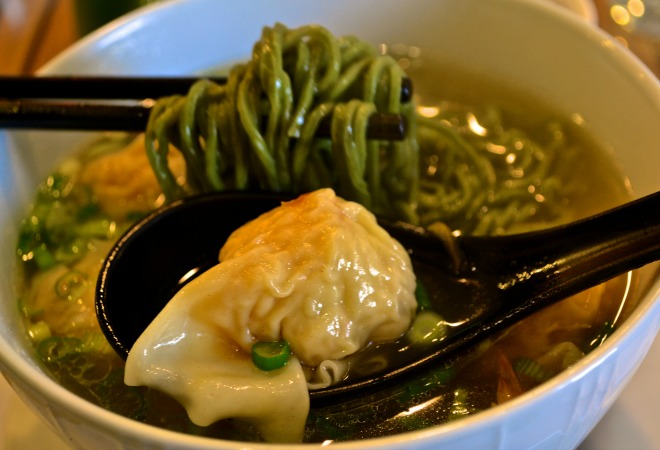 My first memory of a dish made such a delicious impression on me, it remains on my list of favorite foods. That dish is wonton noodle soup. I had my first bowl in Chinatown when I was four-years-old at Mayflower Restaurant. My father and I dined there regularly and I ordered the same thing each time.

Plump pork dumplings fortified with snappy bits of shrimp, enveloped in thin, silky wonton wrappers, bobbed in a swirl of thin, golden wheat noodles. The steaming chicken broth was always dotted with chopped green onions and smelled like fond memories. This was my wonton noodle soup and my childhood in a bowl.

The thing about comfort foods rooted in childhood is that sometimes the recollection of the dish is tastier than the actual item. Often, wonton noodle soups don’t quite live up to my reverie of that romantic first bowl. Then I had a taste of Green Zone’s wonton noodle soup.

Green Zone Organic Asian Cuisine, a health conscious Asian fusion restaurant that emphasizes organic and locally sourced ingredients, is an unlikely San Gabriel Valley gem. For one, Green Zone lists a sizeable salad section on its menu offering ten salads from pan seared sea bass to, of course, kale — not your standard fare in the SGV.

But, what caught my eye right away was the wonton noodle soup. The bowl is customizable with noodle choices like lo mein, Hong Kong-style egg noodle, ramen, vermicelli, and flat rice. However, to keep with Green Zone’s healthful philosophy, I opted for the uncommon molokhia green noodles for the soup.

Molokhia is a dark, leafy green primarily used in Middle Eastern fare with the textural characteristics of okra, but the flavor of spinach. It’s loaded with an alphabet of vitamins and purportedly improves blood flow and vision. The deep green noodle has the springy chew of ramen.

Executive chef and co-owner Jil Cam’s soup stands out because of her chicken broth. Simmered for 15 hours in the tradition of pho and borrowed from an old family recipe three generations back, it’s the base for this wonton noodle soup.

Without good wontons there is no wonton noodle soup. Green Zone’s hefty wontons won me over from the first mouthful. The ground pork was bouncy and light in texture. A mild white pepper brightened the savoriness. Succulent chunks of shrimp brought the signature oceanic sapor to the barely sheathed yet supremely slurpable dumpling with floppy pappardelle-like edges. It was the perfect wonton.

During the Iraq wars, the Green Zone was the safest place to be in the country. In the San Gabriel Valley, the Green Zone may just be the most healthful place to enjoy some of Asia’s best comfort foods.