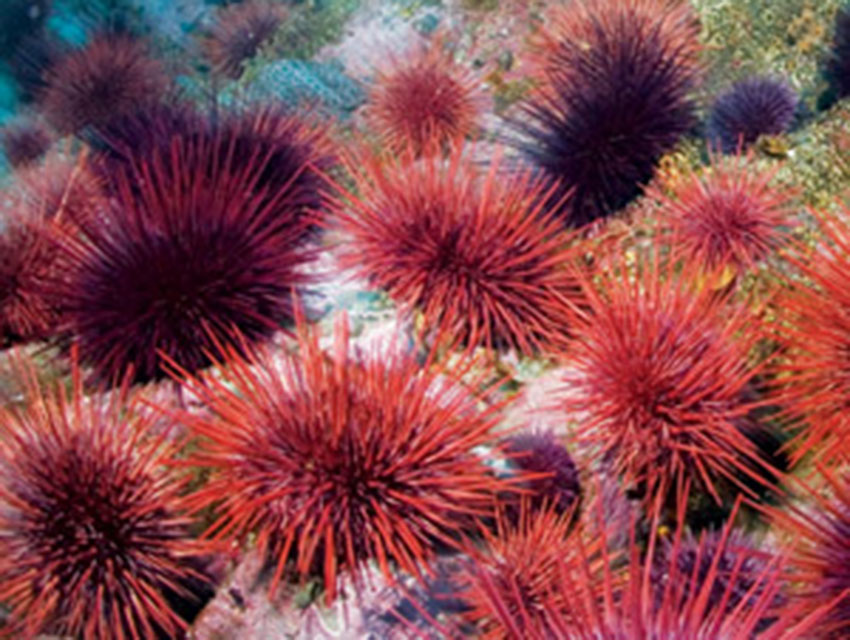 For professional sea urchin diver Jack Butt-ler, swimming with the sharks is not just a figure of speech. “They’re a fact of life out here,” says the 36-year-old, who free-dives for red sea urchins in their prime coastal California habitat: the jaws-infested kelp forests surrounding the Channel Islands.

The waters off Santa Barbara are to sea urchins—known to sushi aficionados as uni—what Napa is to cabernet grapes. “We have the right longitude and latitude to grow the best kelp in the world,” says Buttler, who goes by Uni Jack. “Chefs are all begging for Santa Barbara uni.”

Buttler was born in Northern California and raised on Kauai, where he fished for yellowfin. In a lottery five years ago, he won a permit to harvest the urchins, making him one of only 300 licensed divers in California. (Regulations protect against overfishing and environmental damage.) Today he spends 150-plus days a year underwater, handpicking urchins from their beds.

Each spiny creature produces five fragile lobes, which are bright orange and sweet, with a minerally marine punch. Although uni is harvested year-round, its quality peaks between October and January.

Most of Buttler’s catch is processed and airlifted to top chefs in New York, Chicago, and Las Vegas. But luckily for us, his company, Buttler Seafood, sells live urchins from the dock in Santa Barbara. His customers include Sue Moore, cofounder of hot dog company Let’s Be Frank, who brings the delicacy to her friend Alice Waters’s home on Christmas Eve for her annual Feast of the Seven Fishes. “Santa Barbara sea urchins are the original sustainable seafood,” says Buttler. “It doesn’t get any fresher.”