Home Uncategorized Food + Film: Opulence in The Great Gatsby Takes the Form of... 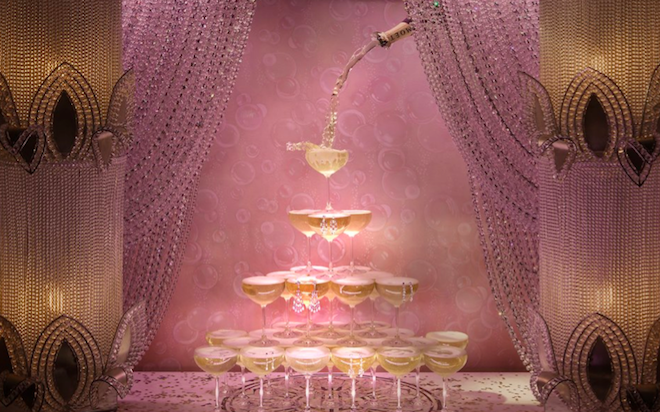 Every Friday five crates of oranges and lemons arrived from a fruiterer in New York — every Monday these same oranges and lemons left his back door in a pyramid of pulpless halves. There was a machine in the kitchen which could extract the juice of two hundred oranges in half an hour if a little button was pressed two hundred times by a butler’s thumb. —The Great Gatsby

The latest big screen rendition of The Great Gatsby, F. Scott Fitzgerald’s novel about Jay Gatsby, a mysterious man with an American Dream, was brought to life this past weekend in fantastical fashion by director Baz Luhrmann  Though the story, which takes place in the go-go ’20s, examines themes like idealism and social upheaval, it was the fabulous fetes and feasts that caught our attention. The oranges, especially, stuck out in our memory.

There’s a vivid scene in the film that does the book’s text (above) justice. In it, Gatsby, his long lost love, Daisy Buchanan and (her cousin, Gatsby’s neighbor, and the book’s narrator) Nick Carraway are splashing orange juice all about, as a futuristic, gilded machine slices and presses hundreds of orange halves. The trio drink golden, sun-soaked orange juice all afternoon while dancing and laughing and forgetting their worries. They drink the juice out of the machine, martini glasses, and champagne flutes. It’s a rare scene in which there’s not a bottle of champagne in sight.

Oranges have a long history as a sign of wealth and excess. In Cuisine and Culture: A History of Food and People by historian Linda Civitello, oranges are singled out as one of Louis XIV’s obsessions. He “was an orange aficionado because the oranges looked like miniature suns, the symbol of the Sun King,” and had the grounds of Versailles covered in orange groves. Dating back to the 1500s, wealthy people and nobility had oranges shipped from the Far and Middle East and threw themed dinners around the citrus fruit, with dishes like “caviar and oranges fried with sugar and cinnamon.”

By 1922, the year in which The Great Gatsby is set, America was already a world power. The wealthiest citizens had citrus, which still must be grown in only the warmest climates, shipped in from around the globe. It was again a sign of wealth, centuries later. But the ’20s didn’t end well for anyone, not even Mr. Gatsby. Once his illicit affairs were exposed, his demise was much like the Sun King’s: the only way to repay that debt was with his head.

The Great Gatsby, from Warner Bros., is currently in wide release.

In a New Prequel to ‘The Great Gatsby,’ Nick Carraway Gets His Own Mystery