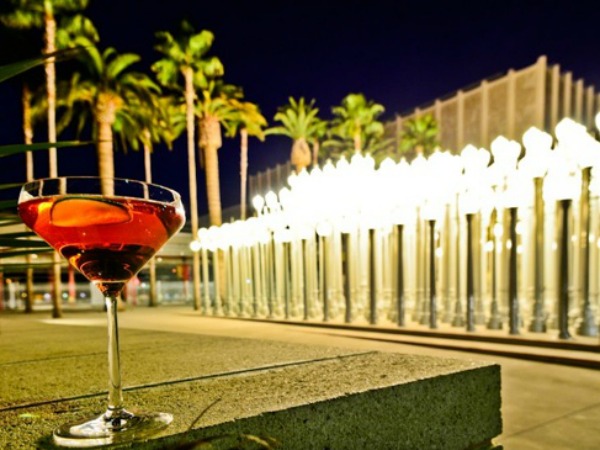 North Hollywood’s Spanish restaurant hosts its first Art of the Cocktail event from 7 to 9 p.m. Mixologist Jonny Whitton will talk to guests about Spanish sherries, proper mixing techniques, infusions, and more while letting folks sneak a peek at his extensive collection of locally made bitters. Select signature cocktails and hors d’oeuvres will be served for $25. More Information.

Handsome Coffee Roasters celebrates its one-year anniversary in downtown’s arts district with a good old-fashioned neighborhood block party. Starting at 7 p.m., the streets will be filled with DJs, bands, drinks, tacos by Guerilla Tacos, and, of course, coffee. Party on. More Information.

Hair of the Dog Beer Pairing Dinner at Maxamiliano – 3/1

Portland’s popular Hair of the Dog brewery visits Highland Park’s Maxamiliano, for a $100 six-course beer pairing dinner at 6 p.m. Brewery founder Alan Sprints will be on hand to talk about the featured slew of brews while chef Andre Guerrero guides diners through dishes such as baked Fanny Bay oysters and braised pork belly. More Information.

The LA Weekly hosts its 5th annual food and wine event at the Petersen Automotive Museum from 1 to 5 p.m. Sample dishes from more than 35 L.A. restaurants along with cocktails, beers, and wines. Participating restaurants include A-Frame, Mo-Chica, the Hungry Cat, and Little Dom’s. General tickets are $75; VIP $95. More Information.

Enjoy a leisurely Sunday afternoon on the lawn at the Pub at Golden Road while competing in (or just watching!) a round of Aunt Sally, the traditional British pub game. If you think knocking a “dolly” off a metal pole with piece of wood sounds simple, you’re in for a surprise. But the grand prize is definitely worth the challenge—winners will receive free growler fills for an entire year! The $40 entry fee per team (two to four people) includes a pitcher of Aunt Sally IPA. To sign-up email [email protected] More Information.

Ray’s and Stark Bar at LACMA are celebrating their second anniversary with a Spanish-themed night. There will be flamenco guitarists, authentic tapas and paella, flaming cocktails, a photo booth, and more. At Ray’s, make sure to search the tables’ silverware drawers for special giveaways such as private cooking classes and free grub. More Information.

It’s the 1960s all over again at CHAYA Venice, where the restaurant is teaming up with local cigar shop Hollywood Smoke for a series of dinners inspired by AMC’s Mad Men. Every first Tuesday until the show’s premier, CHAYA will feature ’60s-inspired cocktails, cigars, and a Euro-Asian-inspired three-course menu. The swinging $100 dinner also includes two cigars. More Information.