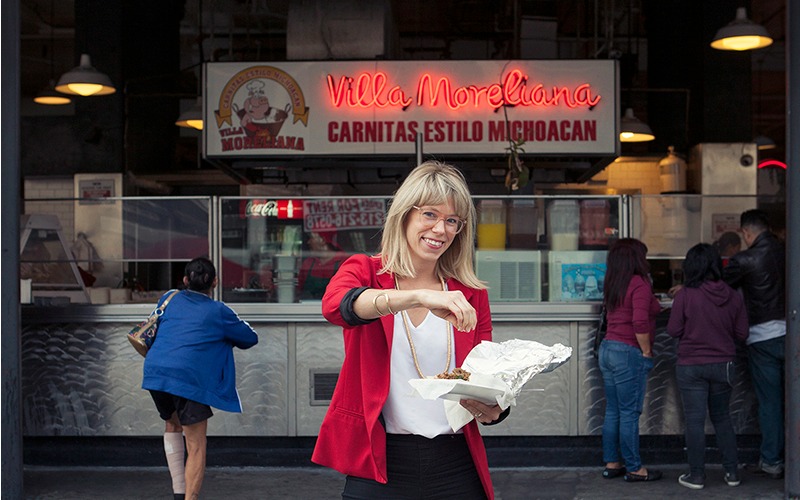 Lesley, our dine editor for the magazine, has the wretched job of eating for a living. I wanted to know, though, what truly memorable dishes she craves from around the city, over and over again. Not the fanciest, I told her. Not the newest, I said. Just the places she finds herself going back to. So, she peeled off her James Beard medal that she typically wears around the office like a statement necklace, and whispered to me all the real food she loves to eat.

I eat a lot of salads. A lot a lot. As someone whose job it is to eat frequent heavy dinners, all I can really stomach during the day is something raw and crunchy. So believe me when I say that the Mediterranean Gem salad at Karen Hatfield’s Sycamore Kitchen is one of the best salads in the city—and beyond! Sweet dates, funky blue cheese, chicken (hey, it’s chicken), crunchy hazelnuts, bitter radicchio. It’s so, so perfect. Though I’m pretty sure it’s terrible for me, since every time I eat one I’m full for a day and a half.

I lived in the South of France for a while in college and they sell sandwiches like this all over the place, especially in Marsailles. I’ve never drank more (and more often) in my life, so I would get one of these at like 11 a.m. to cure what ails me—though in reality I’d go right back to bed. It still serves the same purpose today. Chicken shawarma meat, those pickled beats, FRENCH FRIES, tahini, and garlic sauce all stuffed into French bread and pressed. They offer this thing in pita, too, but don’t you dare do it. Don’t you dare.

To-Go Trust Me from Sugarfish

Keep in mind I’m one week back from maternity leave, so most of my food picks are things I’ve eaten on my couch covered in some other person’s bodily fluid. God bless that Nozawa for allowing me to stay home while still giving me the elevated experience of eating quality mayo-free sushi, while also sort of bossing me around in a way that gets me hot. The box itself has these really intense rules, like “DON’T PUT THE YUZU ON THE SALMON YOU SICK NEANDERTHAL!” I love it.

Chicken liver is almost always good, OK? But the stuff Ori Menashe smears on a plate is the silkiest, most pillowy, smokiest puree I’ve ever had. He serves it with a few hunks of amazing housemade bread and chunky sea salt, and pours a few tablespoons of date vinegar over the top. I’ve eaten an alarming amount of this. ALARMING.

Until you’ve plucked perfectly ripe cubes of avocado drenched in Thousand Island dressing from an ice-chilled metal bowl with a teensy tinesy fork in a room that’s a century old, you haven’t really lived. It’s so retro and weird and awesome and purely comforting. I actually crave it.

I really should have just put a blank line next to the words “at Pine & Crane,” because there is nothing I’ve ever had from her that I don’t instantly want to order six more of and live off of for a month. But the three-cup chicken is pretty great. I’ve given far too much money to the fine people at Postmates by insisting it’s delivered to my house a few times a month. Plus, it’s huge. My husband, kid, and I will all eat it, and still have leftovers. Gah, but then there are those wood-ear mushrooms too! Ah well, I’ll just say the chicken.

Yes, I know it’s a cliché L.A. food pick, but seriously guys, this thing is so good. So good, in fact, that my husband and I used to scrape our hungover butts off our deathbeds on a Sunday and drive from SILVER LAKE to Santa Monica for this thing. Really think about that. What sandwich would you drive 20 L.A. miles for with a hangover? And then wait in line in a small, crowded meat-smelling room? Now that you can get it anytime anywhere from Uber Eats, I feel like some fogey talking about how I used to walk uphill barefoot in the snow to school—backwards.

Remember how I love salads? This one really isn’t a salad at all seeing as the bulk ingredient is a delicious chewy, calorie-rich carb and not a vegetable at all. This is the dish that actually kept me from leaving food writing a few years ago. I was feeling very jaded about the L.A. food scene when I sat down at a very early iteration of Sqirl and ordered this bowl of vibrant, acid-rich, crunchtastic goodness. I had this sudden compulsion to understand exactly what was going on here. Why, and how, was it so good? And who is the flavor mix master who put this thing together? It was something that felt so altogether new and fresh and I realized that we haven’t at all seen the peak of where L.A. food is going. That’s a lot to put on a bowl of rice, I know, but it’s true. I still get it every once in a while when I’m feeling uninspired.

Italian is my jam. I mean, it’s everybody’s jam sorta, but it’s really my sweet spot when it comes to comfort cravings. Sotto is still among my top 3 favorite Italian restaurants in the city. I took my dad there for his birthday; it’s the place my husband requests more than any other. Despite my love of the boot I’m actually not the hugest pizza person, but this little number is unbefrigginlievable. Forget the fact that this is a practically perfect Neapolitan style pizza made on some giant oven they had to build the restaurant around or something. It’s topped with shaved guanciale, ricotta, and fennel pollen. I’m pretty sure there was some version that had honey on it once, too, which sounds gross but is actually heaven.

I married a Texan, and with that comes certain… responsibilities. Like making sure you always have enough Velveeta and Rotel on hand to whip up a batch of queso dip in case some company comes over unexpectedly. When Josef Centeno opened his Tex Mex restaurant my husband weeped—like, actual tears. Mostly because of this queso. I confess I’ve now inherited a sick obsession with filling my belly with supernaturally gooey cheese. Centeno achieves that supreme artificial meltiness with (so he says anyway) no actual Velveeta. I don’t ask questions, I just eat.

Audie Metcalf Ruyle is the Head of Digital Strategy at Los Angeles magazine and LAMag.com. Follow her here on Facebook and Instagram. She wrote “Chef Marcel Vigneron Shares His 10 Favorite Dishes in L.A.“