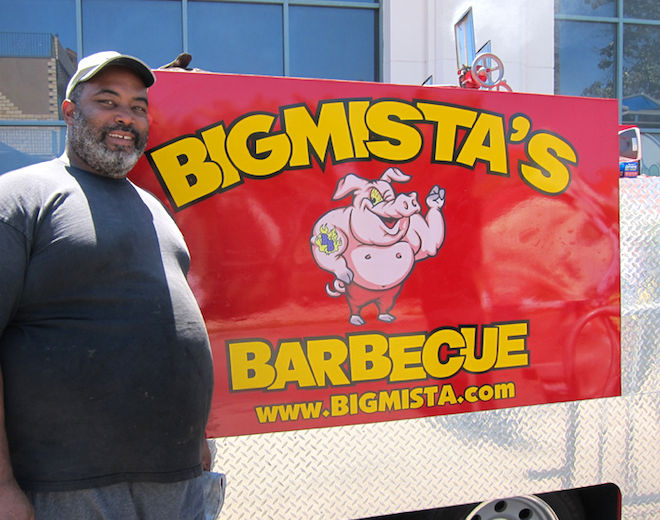 “We’ve wanted to have a real space for a long time. We’d been looking and looking and we’d find something only to then find out that someone else had taken it,” says Phyllis Strawder of Bigmista’s Barbecue, when asked about news of their new location. Set to open downtown later this year, Bigmista’s Barbecue will occupy a space inside the Medallion building at 4th and Main.

Bigmista’s, a smoky labor of love between Phyllis and her husband Neil, has been popping up around town since 2006. The Strawders are widely thought to be some of the most talented pit masters in town, but they’ve never had their own permanent location. Instead, they serve their award-winning smoked brisket, pastrami, and pulled pork at farmers’ markets: Atwater Village, Century City, Bank of America downtown, and in Pershing Square. They also frequently cater private and public events around town, where their famous “pig candy” (“Thick sliced maple bacon, covered in cayenne, brown sugar, some of our rub, and we smoke it ’til we make bacon better”) always makes an appearance.

While the Strawders haven’t yet set a specific opening date, Phyllis says they’re moving forward now with architectual plans, construction, and menu planning. The space will have mostly outdoor seating, and will be very casual. An application for a wine and beer license is under consideration. The pair plan to serve all of their fans’ favorites plus some new creations.

“We’re going to be open for breakfast, so we’re working on a recipe for pig candy pancakes, a barbecue benedict, pulled pork and eggs, and—this we’ll serve all day—brisket chili fries.” The Strawders are excited for this new project, and though they only plan to open for breakfast and lunch initially, we’re hoping that they extend their hours late into the night. Brisket chili fries and a side of pig candy sound like the perfect midnight snack.