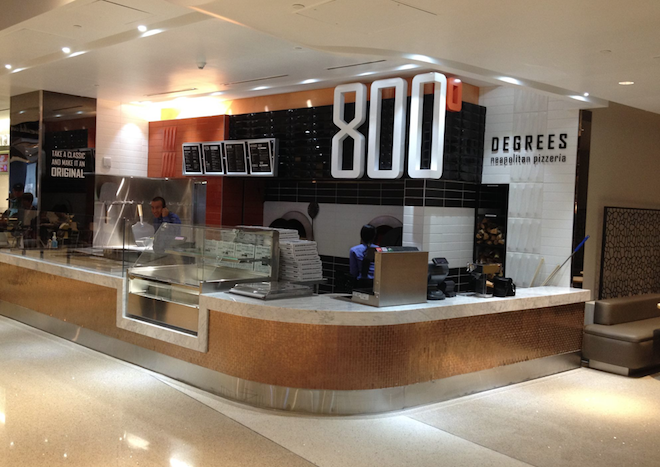 The new dining terrace inside LAX’s Tom Bradley International Terminal has been under construction for over a year. On September 18, all of the new dining units (31 in total) were supposed to open, but delay after delay has pushed grand openings back further than organizers would have liked. Still, there’s lots for international travelers to look forward to—and some authentic L.A. eats to taste now. Even better? Nearly every terminal at the airport is getting some L.A. dining love. Here’s a rundown on what’s open and what’s coming soon.

800 Degrees: Adam Fleischman and Anthony Carron are slinging pizzas at the newest location of their build-your-own-pizza concept inside LAX today. Unfortunately, it’s only available if you’re going out of town as it’s located past security check points.

Vanilla Bake Shop: The mini cupcake and petite pastry shop on Wilshire Boulevard in Santa Monica opened an outlet inside the Tom Bradley Terminal just a couple of weeks ago. Their menu of sweet shots, miniature cupcakes, and bar cookies has been paired down for travelers.

Campanile: A new version of Mark Peel’s iconic (and now closed) L.A. restaurant plans to serve next month inside Terminal 4—without Mark Peel. According to a report in the Los Angeles Times, Nancy Silverton has stepped in, with financial support from her father, Larry Silverton.

Ink.Sack: Michael Voltaggio’s perfectly portioned sandwiches are coming to LAX. Ink.Sack is supposed to open inside the new Tom Bradley Terminal next week.

8 oz. Burger Bar: Govind Armstrong’s burger concept is coming back from the dead and plans to hit Terminal 4 on November 1.

800 Degrees Opened a Massive Hollywood Location, Will Soon Be in Japan