Home Uncategorized Fleming’s WinePad vs. Sommelier: How Did the Wine App Do? 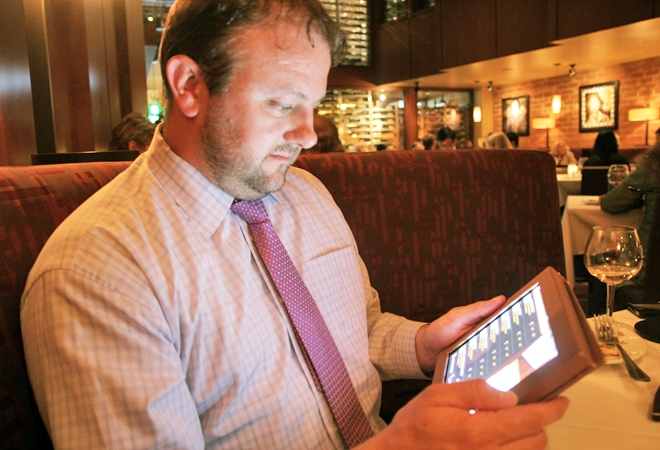 This month, national chain Fleming’s Prime Steakhouse & Wine Bar took its wine list further than Thomas Keller’s French Laundry, who simply put the entire list on an iPad app. The steakhouse’s new in-restaurant WinePad program not only makes its 100 wines-by-the-glass list—complete with tasting notes and a shot of the label—available on a dedicated iPad* but allows you to interact with it.

Peruse through wines by regions, varietals and even 90+ ratings. Check out which three wines will complement your bone-in rib-eye or choose a wine according to your mood. These picks are chosen by Fleming’s Wine Director Maeve Pesquera. If you feel like throwing caution to the wind, the app even has a “Spin the Bottle” option which will randomly pick a wine for you. And if you find one you love, you can email it to yourself.

It’s a fascinating and fun concept which is familiar to those accustomed to Googling wines when making their decisions. But how does it match up to actually working with a sommelier? I asked Michael Shearin, former beverage director/sommelier of Drago Centro, to accompany me to the Fleming’s in Beverly Hills to check out the WinePad and share his thoughts. Michael is an advanced sommelier with the Court of Master Sommeliers and will be taking the master sommelier exam for the first time this July.

We tested out the simple act of choosing a wine to go with our baked brie and mushroom ravioli. Although both Michael and the app matched the Schramsberg Blanc de Blanc North Coast 2007/2008 to the brie appetizer, that’s where the similarities ended. For the mushroom ravioli, he said,  “They went all whites but I think they might be afraid to say, ‘Let’s put a Pinot Noir in here,’ but I think a pinot would go good with this.” And he disagreed with the app’s pick for a German Riesling to go with the ravioli, “I don’t really love this pairing. It’s about cabinet-level sweetness so it has a fair amount of sweetness. I’d have that with something spicy. I’d really want to complement the earthy flavors of the mushrooms.”

As for the WinePad overall, he liked it; especially when used in tandem with a wine-savvy server. “I think the idea is great and it still encourages interaction. The server is obviously into it. This has a ton of details in it but it’s still a version of looking at the wine list. It makes it very approachable.”

Does he see it replacing somms? “It could. But should it? No. It doesn’t answer every question.”

Plus, for those who like to luxuriate in their dining experience, a somm is the way to go. There isn’t an app to replace hospitality and good customer service, and a somm will give you direct answers instead of your having to search for them. But for a busy restaurant, Michael can see the WinePad’s value. “It serves a purpose. Servers don’t have a lot of time to talk to everyone about wine, there probably isn’t a sommelier that can get to every table so it definitely fills a niche.” Fleming’s doesn’t have a sommelier that works the floor but all the servers, bartenders and managers are knowledgeable about wine.

Speaking from the perspective of a shy wine novice (and someone who actually uses the Beer Advocate app to choose beer at stores and restaurants), the WinePad made finding a decent glass of wine in my price point painless. The only thing I’d say is lacking? It doesn’t give you the option to Tweet or post your wine on Facebook.

* The iPad will shut down if you remove it from the restaurant. And it’s locked and solely used for the app, so guests can’t check their email, play games or watch videos.