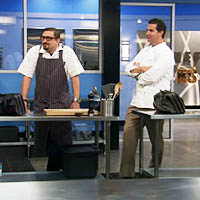 Yes, it’s true—in what seems like forever ago, I flew to Las Vegas to shoot the final episode of Top Chef Masters, Season 4, and at long last it airs tonight! It was an incredible honor to share a table with folks like Ruth Reichl, James Oseland, Francis Lam, and even L.A.’s own Krista Simmons. So what was it like? They make you sign a legal tome that limits most of what I can say, but here are a few observations I don’t think will land me in TV prison:

1. I have no idea who wins Top Chef Masters Season 4. I was present at the final dinner showdown, but I was back on a plane to L.A. before they chose the year’s Top Chef Master. However, until last Wednesday, I was one of the few lucky people to know the final two competitors [Tivo Spoiler Alert!]:  Chris Cosentino and Kerry Heffernan. The two chefs couldn’t be more different in their culinary approach and it made for an intriguing match-up.

2. Yes, the food really is that good. The dishes I ate that day were among the best I’d eaten all year. Sure, we nitpicked a few things on each plate—someone has to lose—but overall the grub was outstanding. That is in large part due to the fact that the Magical Elves production team made the food the top priority. When a dish was ready, the director called, “Action.” There was no waiting around allowing food to get cold. That’s definitely not the case on all shows.

3. That table was seriously intimidating. As I looked around the table and saw the caliber of professional food-writers, editors, and chefs, I realized something: I’m the ‘who the heck is this girl?’ girl. I’ve watched the show enough to know that there’s always one of those, and this go-round it’s me. And you know what? I’m totally fine with that. The feeling of having Ruth Reichl agree with something you say about food is right up there with a Space Mountain Fast Pass as one of best things ever.

4. They pour very decent wines. You never hear about it, but I remember really liking whatever was poured with the meal. They should do a whole “Top Chef Wine Pairing” web series. Remember the time Project Runway had that model spinoff? This would be like that, just with actual eating.

5. The following statement is not the stuff of PR: The Cosmopolitan Hotel is pimp. I flew in around 11:30 p.m. the night before the shoot, had to be ready by 7 a.m. the next day, and left for the airport directly from set. All in all I was at the hotel for about eight hours. But the suite I spent that time in was easily the most baller hotel room I’ve ever experienced. There was a kitchen, a dining room, a foyer (a foyer!) and the balcony overlooked the Bellagio fountains. I made sure to wander down and grab a solo drink in the casino before bed and took a Jacuzzi tub soak at 6 a.m. the next morning. It was enough to have me longing for a chance to go back, and I’m only so-so on Vegas in general.

OK, that’s it. The rest is verboten. Catch the final episode tonight at 10 p.m. Pacific on Bravo. (I’m pretty sure I make more than one sex-food analogy—TV gold!)