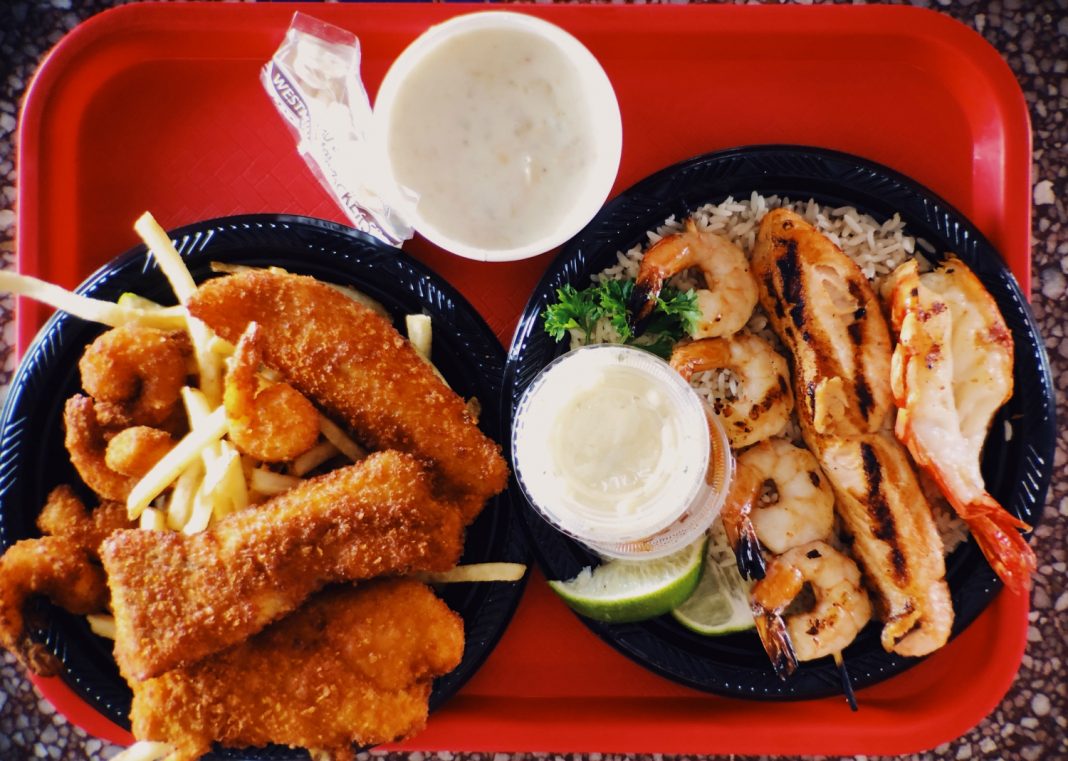 The mostly outdoor establishment has two sides connected by a short hallway. On one side there’s a market selling raw fish and cooked shrimp by the pound, plus cups of ceviche and shrimp cocktail. On the other, busier side, a few employees take lunch orders from the dozens of customers who always seem to pack the place. The staff doesn’t write anything down, ever.

“People come in and are awed by it,” says manager (and daughter of the founder) Sheri Kopelowicz of her staff’s ability to memorize orders. “I’d say 95 percent of orders are out correctly. We start employees off on soups and sodas, so they get the feel of it, but to be at the counter they have to learn the menu, and questions that people might ask, like about food allergies. It’s an old-time way of taking orders. We don’t have any digital format here.”

The analog system is a holdover from when Bill Shinbane started the market in 1961. It was intended to just be a small retail arm for the seafood importer, processor, and packager. When the warehouse moved five blocks away around 1970, Shinbane kept the property and expanded the offerings: mostly pre-cooked shrimp and smoked fish. The menu quickly changed—“he got tired of smoking the fish,” says Kopelowicz—to a long list of grilled and fried items, plus chowders and gumbo. Except for the sausage that goes in the gumbo, the menu is strictly seafood.

According to Kopelowicz, their three best-selling plates are the fried combo (shrimp and fish), the charbroiled combo (a giant shrimp, salmon, and a skewer of regular-size shrimp), and the grilled giant shrimp, massive butterflied prawns that are easily twice the size of regular shrimp. They’re high-quality and generous platters. (The founder specialized in shrimp, and it still seems to be a point of pride.) The New England clam chowder is exceptional, stuffed full of chopped clams and potatoes, and it’s always worth checking out the catch-of-the-day board to see if one of your favorites is available. Some folks order whole fried fishes.

Shinbane and his wife (Kopelowicz declined to share her mother’s name) created the Fisherman’s Outlet recipes together. A local company makes the tartar and cocktail sauces they developed about 35 years ago, and the coleslaw and every other sauce is made in-house: garlic, cajun (which to some tastes like a marinara), teriyaki, pico de gallo, and mango salsa. The ketchup and Tapatio and Original Louisiana Hot Sauce are brought in.

Kopelowicz remembers the restaurant’s neighborhood being a lot more industrial when she’d visit as a child. “It was mainly the produce market and other seafood wholesalers,” she says. “And then it kind of morphed, and we’re in this triangle, with the wonderful Alameda side, which is booming, and Skid Row on the back end.”

Still, the weekday crowd is much the same as it was in the 1960s and ‘70s: “Truck drivers, lawyers, detectives, people from the warehouses. Then on weekends those people bring their kids. We’re on the fourth generation of kids.” And there are no plans to change anything.