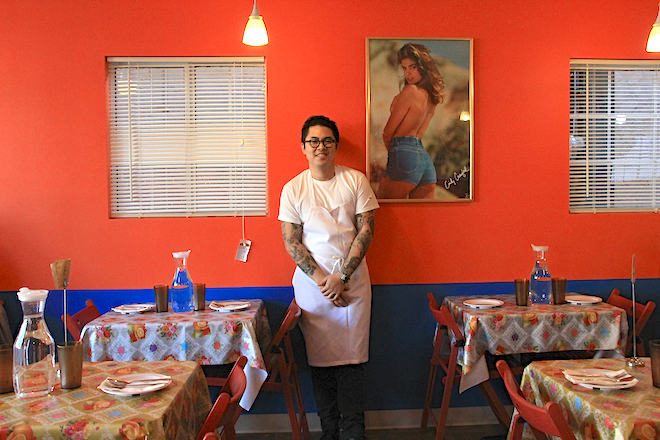 Chef Kris Yenbamroong’s poetically named Night+Market Song—which simply means Night+Market two in Thai—has been open in Silver Lake for about a week. “The first night, of course we weren’t really ready, but we had to open because [this project] had been delayed for so many months that we just had to open, and there was a line of 30 people at 5 p.m. We hadn’t done any kind of major press push, but there it was, a line,” Yenbamroong recalls with a faraway look in his eyes.

Since he took over a corner of his parent’s West Hollywood-based Thai restaurant Talesai a few years ago, the young chef has become something of a champion of Thai street food in L.A. “That first night, after it was over, I just thought to myself, ‘man, why do people do this, why ever even open a restaurant?’ It’s just so difficult. And then the next few nights things evened out and our neighbors started coming by and kids started coming by after school—there’s a school across the street—and,” Yenbamroong sighs, “it’s working, I think, it’s coming together.”

Night+Market Song opened with about 20 dishes on the menu; most of the items were taken from Night+Market West Hollywood’s list. Chicken wings, larb (chicken or tofu), moo sadoong (‘startled pig’), and variations on fried rice are all available at Song. But you’ll also find a few new dishes that Yenbamroong is excited about—dishes that (at least for now) you can’t taste at the original location.

Sapa-get-dee pla khem, translated as ‘bangkok mall pasta,’ is one such dish. “The first time I had it, I actually wasn’t even in a mall,” says Yenbamroong. He was at a street stall-like shack in Bangkok where they served street food and Thai-style Italian food. “People like to get into deep discussions with me about regional Thai food, and that’s cool, we can do that, but I’m not really trying to focus on that so much—I’m just trying to make really good food, and this is one of those dishes I remember eating with my aunt that’s just delicious.” The chef takes cooked spaghetti and adds it to a wok that has been seasoned with salted, fermented fish and oil. A handful of garlic—chopped and sliced—is added, followed by chiles, strands of young peppercorns, and Thai basil. Looking beyond the soy and oyster sauce, the dish is a Thai interpretation of Italian pasta: The base flavors, garlic and chili are shared between the two regions. The salted fish, which adds an unmistakable hit of umami, could be exchanged for anchovies or parmesan, the heat could come from Calabrian chiles, and the basil would add a freshness to any rendition. Yenbamroong’s version is shockingly spicy, but then the warmth of the garlic and the meaty bits of fish come to the rescue. For Westsiders who have been frequenting Night+Market on the Sunset Strip, it’s reason enough to venture east.