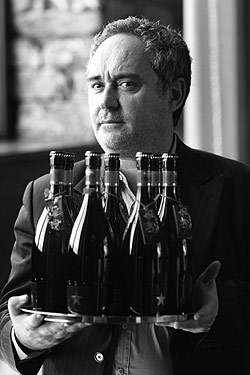 Ferran Andria—better known as the executive chef/evil mastermind behind Spanish molecular gastronomy giant ElBulli—has been getting some buzz this week about his controversial foray into the realm of pizza, which has Italians none to happy. (Worried about liquefied basil spheres dotting their precious Margherita, no doubt.) Well, now it has been announced that, together with mega Spanish brewer Estrella Damm, Andria has developed Estrella Damm INEDIT, a beer specifically created for food pairings. (What does one pair with Parmesan “air” exactly—pilsner?) Silver Bullet this is not—the brew comes in a 750ml black bottle, and is “to be served in a white wine glass, filled halfway and chilled in a cooler.” Alrighty then.

The taste? INEDIT is described as being slightly cloudy, with “acidic, sweet and sour flavors.” As of today, you can try it yourself at the Bazaar at SLS, La Loggia in Studio City, and Café Sevilla in Long Beach. Though I also hear they’re going to be selling it at BevMo and, of all places, Albertsons. Slumming it indeed, Andria.