Home Uncategorized First Look: What to Eat at Roadhouse L.A. 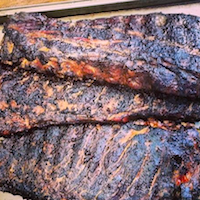 And for his next trick, Umami Burger founder Adam Fleischman presents: barbecue. New to the Improv comedy club on Melrose is Roadhouse L.A., cheffed by Robbie Richter. Formerly of New York, Richter was most recently at the city’s acclaimed Fatty ‘Cue in Brooklyn. He brings with him a deep understanding of Southern barbecue styles, and uses them playfully in fusion-like dishes such as pork ribs with compressed watermelon, pulled pork with banana pepper vinegar, and jerk chicken with curried black eyed peas. Pull up a bar stool and order the roadkill fries—they’re as over the top as they sound. The prize for a table of two or more? That would be the head of the day with Texas chainsaw toast.

The inside of the old Improv theater has been completely renovated, and there are no traces of the old, dank bar. Instead, the place looks like, well, a roadhouse—complete with an old gas pump, glass garage door (it rolls up to open the front room out onto Melrose), and unfinished wood beams. An antler chandelier lights the downstairs dining room.

Roadhouse L.A. will be soft open early next week with an official opening planned for February 6. Dinner, drinks, and late night eats will be served in the upstairs and downstairs dining rooms, at the bar, and inside the Improv theatre. It sounds like the most interesting new dinner and a show in town.