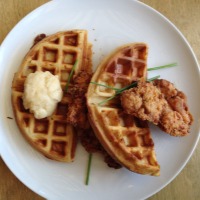 When you head to Downtown’s bustling flower market, you usually have one item on your mind—and it’s not chicken and waffles.

That might soon change with the debut of Poppy + Rose, a homey diner open for breakfast and lunch tucked between two vast warehouses which offer fresh flowers to the public every morning. The project is a collaboration between chef Ryan Lamon and his wife Diana, founders of Peaches’ Truck, and chef Michael Reed, who runs the catering company Root of all Food. Lamon and Reed, who worked together years ago at The Standard, had been searching for a restaurant location for months, and finally came upon on an airy, open space formerly occupied by a Mexican restaurant.

The restaurant’s name is obviously an homage to the nearby market, but also nods to Ryan Lamon’s Southern heritage (the Cherokee rose is the state flower of Georgia, his hometown) and the California heritage of Diana Lamon and Michael Reed (the poppy is California’s state flower). The kitchen serves the kind of homestyle American comfort food you’d expect, prepared with local ingredients and a fresher sensibility.

As you would imagine, opening a restaurant near a flower market has its perks. The wooden tables never lack centerpieces, and according to Dinan Lamon, “It smells like fresh flowers in here all the time, it’s amazing.”

They also offer a decent selection of pastries, including house-baked blueberry muffins, to compliment a quick cup of coffee at the counter.

For lunch, you’ll find an assortment of sandwiches and salads, including a fried chicken sandwich with bread and butter pickles, a cheesy grilled patty melt, a pulled-pork sandwich, and a cobb salad made with smoked chicken.

Lamon plans to further expand to the menu, adding a smoked turkey reuben in a few weeks, along with fresh fruit pies cooked by his wife Diana. Even now though, the offerings are a huge gain for the neighborhood. “The only other option to eat around here is the Danger Dog cart down the street,” says Lamon, “we wanted to offer good food that was a bit more substantial.”

Poppy + Rose will hold its grand opening this Saturday, July 28, in unison with the debut of The Wall Farmers Market, a new Downtown market on Wall St. that will be held every Saturday that will feature food, produce, and—of course—flowers.