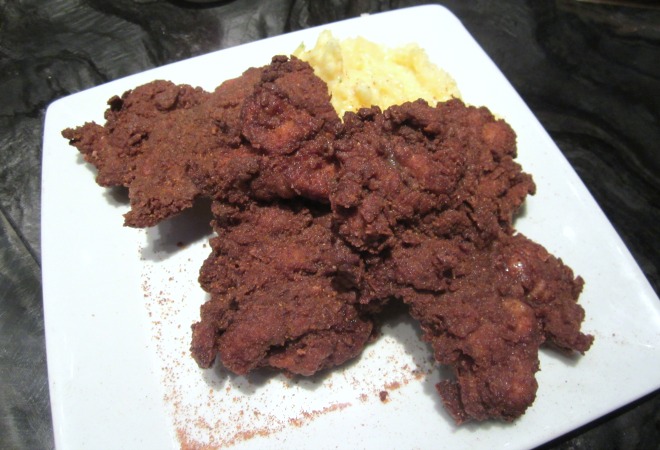 Last night, at a preview event in the new ChocoChicken space near Staples Center, we got to taste some chocolate fried chicken. And it wasn’t half bad. In fact, it was pretty darn delicious.

When Adam Fleischman and his business partners announced he was opening not one but two restaurants (the other location is planned for Santa Monica) that would specialize in chocolate-flavored fried chicken, the reaction amongst the food world was skeptical, even incredulous. Had the man who brought us Umami Burger gone mad? Had the mish-mash food craze jumped the shark? Will this food cause instant diabetes? The answer is no. ChocoChicken’s signature dish is a lot less silly and ridiculous than it sounds, and that is a good thing.

Brined for 36-hours, the chicken itself was exceptionally moist. The crunchy crust, stained a ruddy brown by the addition of ground chocolate, was subtely sweet and spicy. Oddly enough, the flavor was reminescent of chocolate graham crackers.

There were dipping sauces too, thought they weren’t really necessary for the juicy chicken: honey mixed with hot sauce, miso-ranch dressing, and the most intriguing, chocolate ketchup, which tasted exactly like British HP sauce with a spoonful of cocoa powder mixed in. To our own surprise, we couldn’t stop dipping our duck fat fries in it.

Mashed potatoes used white chocolate instead of butter, but the difference wasn’t terribly noticeable. Biscuits, which the menu touted as “70% Butter” resembled Pillsbury crescent rolls taken to their doughy, ultra-rich extreme. For dessert, there were housemade s’mores moon pies. There were cans of PBR to drink.

If you couldn’t tell, all of this is pretty much the antithesis of sensible health food, which might be a selling point to its target audience.

Located in what was formerly Corkbar, the space resembles your typical bro-tastic sports bar, with its booming rock soundtrack and the steel plating lining the walls.

It’s too early to tell if Fleischman will have a hit on his hands in the same magnitude as Umami Burger, but in a city not known for its fried chicken, ChocoChicken has a chance to make a noticeable splash.