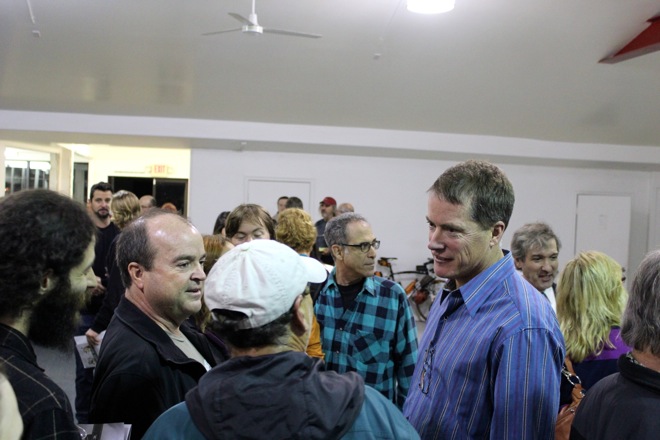 In case you haven’t been tuning in, our local craft beer scene is blowing up. DRAFT Magazine beer editor Christopher Staten just released his “Top 25 Beers of the Year: 2013” list, and out of those 25, a remarkable seven of them came from California breweries:

Paso Robles-based Firestone Walker Brewing Co. is proceeding with the development of its Venice taproom/restaurant, holding an informal neighborhood meeting on Tuesday night to discuss its plans and address any concerns locals may have.

Co-proprietor Adam Firestone was on hand to share the company’s vision, show off proposed layouts and elevations, and he was very clear that Firestone Walker intends to have the facility—which will include a brewhouse, tasting room, family-friendly restaurant, retail operation, and event space—be a part of the community, with an emphasis on beer education. “There is a huge homebrewing community in L.A.,” Firestone explained, adding that their brewing would be done on a small pilot batch system. “We want to brew on a demonstration scale, so anyone who is interested can see exactly how it’s done.”

The brewery has applied for a conditional use permit that will allow them to operate any time between 7 a.m. and 11 p.m., though Firestone assured attendees that they wouldn’t be opening that early. “We’ll be open for lunch and dinner service,” Firestone explained. “No breakfast,” he smiled, adding that the menu would be similar to the existing fare at its Buellton and Paso Robles taproom locations, but with a little local Venice flair added in.

Parking, noise levels, and traffic seemed to be the largest concerns raised by residents and local business owners, but each was noted and addressed by Firestone and the community liaisons present at the assembly. Firestone said that they were interested in exploring any and every way to minimize their impact on noise, traffic, and explained that there were 71 existing parking spaces, with the hope of being able to stack in more, in addition to 36 bicycle parking spots.

Next, Firestone Walker will present its plans to the Venice Neighborhood Planning Committee, followed by the Venice Neighborhood Council and the Los Angeles City Zoning Administrator. No official public hearings are slated yet, but there will be at least two in the coming months. The company is still hoping to have the taproom open by late 2014.