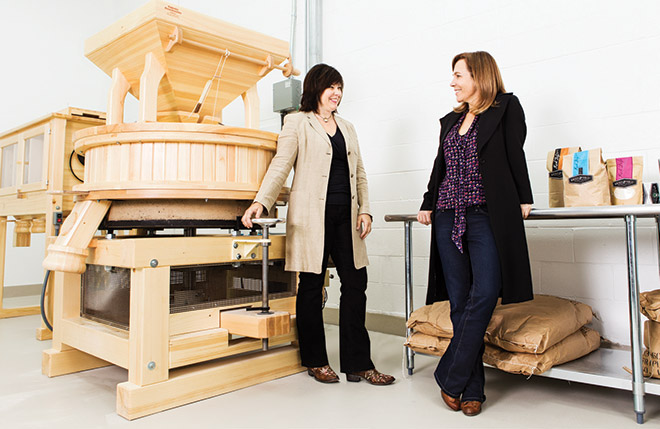 For a recent open house at Grist & Toll, the guest of honor was a 2,500-pound mill from Austria. The tall pine structure—what Fernando Botero would have sculpted had he been an abstractionist—quickly became the backdrop for scores of selfies. “The mill was more a celebrity than we were,” says Nan Kohler, cofounder of the new artisanal flour operation. “I don’t know how I feel about that.”

Kohler, a former pastry chef at Sherman Oaks’ Sweet Butter, and her business partner, Marti Noxon, a TV and film writer-producer, met two years ago in Paris when they couldn’t not bump into each other. Noxon, an avid baker, was in her “year of bread” and wanted to tap into her new friend’s skills. The two bemoaned the lack of unadulterated ingredients. Why not take a cue from Europe, where the better bakeries grind their own flours?

By late 2013, the duo finally had a space (not every health department was thrilled about wood as opposed to easy-to-clean steel). Kohler was also at the end of her search for landrace wheats, varieties that can be traced to the 1800s and haven’t been subjected to the same tweaks as modern grains. She found an Arizona farmer nurturing two types she coveted: Red Fife and Sonora. The bread bakers’ telegraph also brought her Tom Shepherd, a farmer who’d cultivated five acres of Triple IV wheat, another heritage variety, in Santa Ynez.

Landrace wheats may spell some relief for the gluten sensitive because they are easier to digest, but Kohler notes “we’re not health gurus. We’re passionate bakers who care about the quality of ingredients.” In grinding the entire berry, Grist & Toll preserves flavors and textures—and nutrients—lost in commercial processing. The business caters primarily to restaurants and bakeries, but it’s open on a limited basis for retail sales (check the Facebook page for days and hours). Kohler loves educating buyers on how to use the flours, which turn back the clock. She’s also calling on anyone with a few acres of land to think about planting the next amber waves—but make them heritage grains.