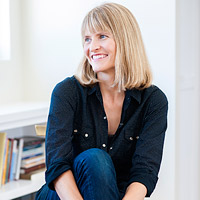 Overhearing someone gush about their latest food experience is commonplace in L.A. “I love trying new restaurants,” a girl told me recently. “I’m a total foodie.” But Dana Goodyear, New Yorker staff writer and author of last month’s Anything That Moves (also my former professor—lucky me), would argue that the movement goes deeper than a mere affinity for crossing new eateries off of a to-do list. It has, in effect, become a sport, one in which the winner is the man or woman who abandons psychological, physical, and often legal limits for the sake of culinary adventure.

Goodyear has taken the liberty of eating her way through the trenches on our behalf, reporting on foodie-ism with a spectacular precision that immerses the reader in this aspect of American food culture. Here, she talks the juxtaposition of “crudity and refinement,” foodie-ism’s place in L.A., and, of course, the strangest thing she managed to eat (brace yourselves).

Congratulations on the new book! What has the general response been so far?
Everyone can relate to the idea of food having entered the center of the conversation. Food as a hobby used to be an elite past time, and it has become something that is totally ordinary for people of every background. In that way, we see the growing up of the American food scene, that it’s okay to be a regular person and be really into food.

“Foodie” is a label people throw around very casually, but it seems there’s a difference between the people you’re writing about in Anything That Moves and someone who simply likes to eat. How would you define a foodie?
It’s on a spectrum: the person who likes to know what the new restaurants are and the person who’s trying the crazy new stuff. Everyone has things that they will and will not eat—not everyone is seeking out duck heart curry, but some people are. That defines the leading edge of the movement: its association with thrill seeking as well as a high tolerance for things that other people find disgusting. Those ideas give the movement its identity, but they also give foodie-ism its attitude. Being really interested in food used to be more about indulgence, and now it’s about adventure.

Do you consider yourself a foodie?
I don’t. I feel like I’m reporting on this group of people, not trying to join them. I had to eat a lot alongside these more extreme eaters to give my readers a sense of this world, but I resist the term for myself because it calls my objectivity into question.

What’s the origin of the word?
The word is an interesting one because its cuteness rubs some people the wrong way, but I actually think it is a really good word for what’s going on. First of all, it’s an American word. The other words we have to describe the same type of thing are either French words like gourmet or Greek words like epicure. “Foodie” came about in the 80s—a critic named Gael Greene coined it—and it really feels American to me. The cuteness of the term also suggests something about the youthfulness of the movement; I see a lot of young people spending all of their money on food. It’s become a form of entertainment. It also has a democratic feeling to it, like it could apply to any kind of person.

How did food writing become so interesting to you?
This movement seems to say something about American culture. Food as food is interesting, but food as a reflection of the culture producing it is a lot more interesting. It’s a way of finding out what’s happening in America right now at a time when Americans are starting to eat more resourcefully and are looking to other cultures that have a longer tradition of eating resourcefully. How did you decide which aspects of foodie-ism you were going to write about?
A guiding principal was finding things that until recently would not have been considered edible being embraced by high-end chefs; restaurants and food that were operating in a legal gray area interested me because that’s a big shift directly connected to foodie-ism. It’s a kind of revolution against anything official, whether it’s government approved or health department approved or even has a business license to operate. I was also interested in the foods of poverty being exalted and recast as the foods of the elite. Organ meat is a great example, or anything foraged—insects, horse meat. Any of these things that are taboos are taboos because they’re associated with poverty, and the chefs in the most expensive restaurants in America are asking us to examine and reconsider them.

I have to ask, what is the strangest thing you ate while reporting this book?
The idea of what is strange is totally relative. In the 1940s Hawaiian Punch was considered exotic. One thing I ate that really made me think was this coffee called Kopi Luwak, which is made from beans that have passed through the digestive tract of a wild Civet. It’s incredibly expensive—I think I read about it first in the pages of Los Angeles! It’s provocative because it’s sort of a universal definition of inedible, if another creature has already eaten it, and yet this is being presented as a delicacy that real foodies have to try. That was challenging on a mental level, but there were other things that I found really challenging physically: I couldn’t make myself eat a Century Egg, which is a putrefied egg common in Chinese cooking. I couldn’t get the fork in my mouth. I conclude the book with the greatest challenge that I could imagine, which was eating Balut, a Filippino delicacy that is an almost-ready-to-hatch chick, but it’s cooked whole and boiled in the shell.

Bones and beak and feathers and all?
Yes.

How did it taste?
Interestingly, taste was not the limiting factor there. It was a purely psychological problem. It tastes like chicken soup with hardboiled egg, or a combination of a lot of chicken and eggs dishes that are really familiar or even comforting.  But when you know what it is and you can see what it is, it’s pretty daunting. But I also discovered a lot of things that I thought would not be appealing but turned out totally delicious.

What did you discover?
So-called “ant eggs.” They’re the larvae of ants and they’re a delicacy in Mexico. There it’s known as Mexican caviar, or escamoles. Those are really wonderful.

What is specifically “L.A.” about this movement?
The whole thing is very Los Angeles. L.A. chefs have had the benefit of working in a state that hasn’t been considered a food capital, so they have been free to experiment without the burden of greatness that sits on chefs in cities like New York, San Francisco, and Chicago. As a result, they’re really experimental. They have access to the best produce in the country at our Farmers’ Markets, and they have access to the ingredients that are being sold in Vietnamese, Chinese, Hawaiian, Japanese, and Latin American markets. Then there are the small ethnic restaurants that act as an inspiration to the chefs, too.

What three L.A. restaurants would you recommend to a foodie?
Wolf’s Mouth, which is the underground restaurant ran out Craig Thornton’s loft apartment downtown. It’s a tasting menu set-up that’s incredibly specific to what he was able to gather up that day. It’s thoughtfully presented and often puts before diners things that are challenging to them in some way. He’s really pushing people to think about their food, but he’s also presenting it beautifully and deliciously. Laurent Quenioux cooks out of a restaurant called Vertical in Pasadena, and he does pop-up dinners where he will present his otherwise impossible to find raw French cheeses and insects and things like rooster testicles, which he gets out of the supermarkets in the San Gabriel Valley. And then I think Animal is also really important to look at. They’ve been on the scene for a while, but they were early champions of whole animal cooking and presenting a lot of cuts that were unfamiliar. They were responsible for that duck heart curry, and they were serving veal brains and foie gras when they could.

Where does foodie-ism go from here?
I think that daredevil aspect will simmer down and we’ll be left in a landscape where a lot more people are excited about food and are comfortable with making it part of their identities. And that’s a good thing, because if more people care about what they’re eating, the better the food gets. And I do think some of the ideas put forth by fancy restaurants will make it to the mainstream. Look at sushi, which used to be a very rarified experience. Now it’s in every grocery store in America.