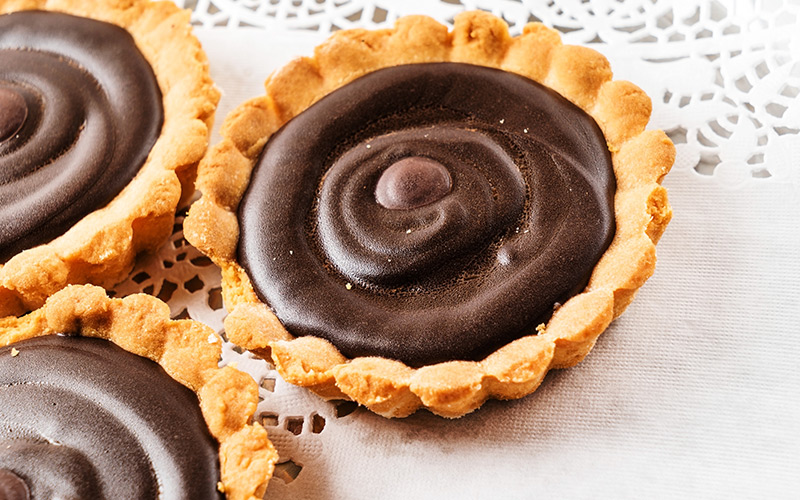 Pie, that humble, dependable dessert, is at once ubiquitous but often forgotten. Yes, you eat the pumpkin variety every year around this time; perhaps your wacky aunt Geraldine makes a cherry one on the Fourth of July. But when you lie in bed at night with your stomach grumbling at an audible level and every fiber of your being yearning for sugar because all you’ve “eaten” that day is a liquid serving of pulverized vegetables that has somehow been normalized as a legitimate meal, do you mean to say you’re daydreaming  about and salivating over and searching Postmates for pie? Doubtful. But trust: pie is about get all up in your REM cycle thanks to this roundup of the best chocolate varieties in Los Angeles—and we’re not talking French Silk from Baker’s Square.

National Pie champ Nicole Rucker was collecting contest ribbons while putting Gjelina and Gjusta’s pastry program on the map. (Her legacy lives on in the famous baklava croissants and flaky butter crust fruit pies still served today.) Now she’s building up the Rucker’s Pies name and rolling out her chocolate chess every Sunday at Smorgasburg LA by the slice ($6) and whole pies to go ($42).

A generous hand of bourbon adds a hint of toasted caramel to this dark chocolate pecan pie, an excellent pairing for after-dinner digestifs. Elisa Testone’s gem of a dessert shop is hidden in plain sight on Venice’s bustling Lincoln Boulevard, and as the name implies, there’s always a choice to be made with her desserts—traditional or gluten free? Whole pies to go are $35. Add a mason jar of house-made whipped cream for $8.

A hint of pasilla chile, cinnamon, and nutmeg add warmth and complexity to the intensity of this chocolate pie nestled in a buttery graham cracker crust and topped with a fluff of espresso whipped cream. While built on a tradition of multi-generational family recipes, The Pie Hole—now with three L.A. locations, one in Orange County, and another coming to Glendale—is famous for culinary creations like the Earl Grey, Maple Custard, and of course, the Mexican Chocolate. One caveat: this whole chocolate pie to go ($36) is not on the Thanksgiving pre-order menu, so you’ll have to call ahead and pick up one on a first-come basis before the big day.

Channeling the nostalgia of campfire s’mores, this chocolate pie in a pecan-graham cracker crust is topped with a skim of toasted house-made marshmallow. The masterpiece earned Simplethings a shout-out from Food & Wine magazine as one of America’s best spots for pie. It’s available for Thanksgiving pre-order ($25), or instead of one large pie, consider walking into one of the three Simplethings locations shortly before Thanksgiving Day and picking up an assortment of single-serve, palm-sized cutie pies ($2.75 each)—you know, to keep things simple.

How to Spend 14 Hours in the NoHo Arts District

Where to Get the Best Milkshakes in L.A.