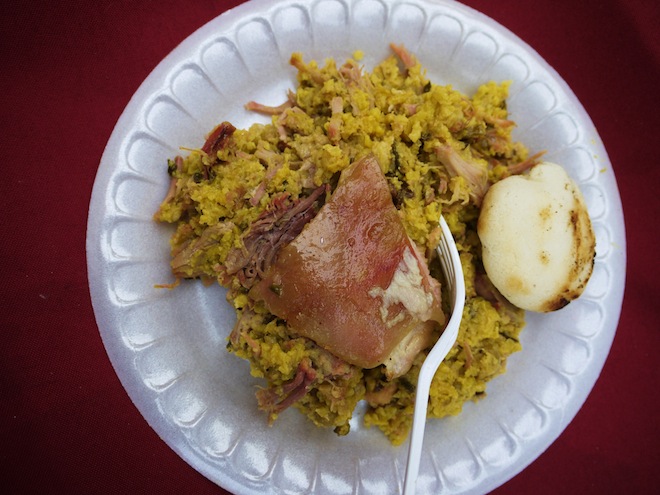 “Pico Rivera has a sports arena?” was the most common question I was asked when I informed friends that I was going to the Seventh Annual Festival Colombiano at the Pico Rivera Sports Arena. On Sunday, July 21, I attended a giant rumba (Colombian party with eating, drinking and dancing) to commemorate Colombian Independence Day (July 20, 1810). The party lasted seven hours; most attendees—99.99% Latino—spent that time on the dance floor shaking their hips to cumbia, bachata, reggaeton, and house beats played on separate two stages.

As at any proper rumba, there was Colombian aguardiente available by the shot or bottle service, live bands, and a separate area for regional Colombian cuisine from five different departments (provinces).

What really caught my attention was the Christmas tree shaped barbecue rack with hanging cuts of steak at the booth run by Rialto-based catering company, Llanera donde Chucho. They offered a plate of well-seasoned strips of steak to go with an arepa, aji (mild Colombian hot sauce), steamed cassava, and Yukon golds sitting in for the usual Colombian papa criolla potatoes.

Another caterer, Liliana’s, featured the legendary lechona tolimense from the Tolima region of Colombia. A whole suckling pig stuffed with pork and fried chickpeas is stitched up and roasted until golden brown. This version had rice in the stuffing, which isn’t traditional in Tolima, but if rice cooked in pork fat is a sin, then let me be forsaken.

The best thing about all of the heavy foods at Festival Colombiano is that you have seven hours to work off the food to the infectious dance rhythms of Colombia.

The Festival Colombiano takes place each summer during the month of July.