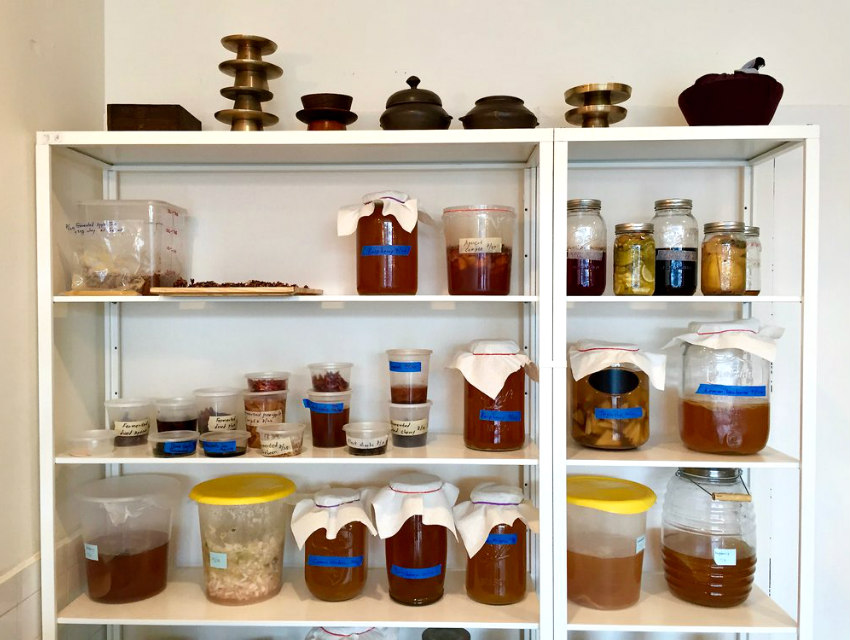 It figures that pickling was what first renewed our interest in food crafting. Pickling is cute. It involves quaint mason jars, crunchy produce, and pert vinegars. Plus it’s fun to say. But the broader field of fermentation, of which pickling is just one part, has a grodier side. This is the domain of “good” bacteria, yeast, and slimy “mothers.” These less appetizing aspects of fermentation are the next frontier of flavor, as L.A. chefs toy with ingredients to see what happens as they age. The results are often delicious.

“Fermentation makes amino acids, which are a key component of umami,” says Kwang Uh, half of the two-man team running Hollywood’s eclectic minimall sensation Baroo. Uh studied the process at the headquarters for this kind of research, the Noma Science Bunker in Copenhagen. You can taste what he absorbed in much of Baroo’s menu, particularly in the noorook. The dish features a variant of Japanese koji, a bacteria made from cooked grains—traditionally rice. At Baroo Uh creates koji by fermenting Kamut, farro, and Job’s tears (or adlay), whose nuttiness and intense depth are sharpened when spooned onto a plate and topped with pickled rose onions.

Koji also adds effervescence to amazake, a Japanese rice drink that Josef Centeno serves at Orsa & Winston. He combines it with the dregs of a sake vat, ginger, and honey, then lets it sit. “It’s slightly fizzy and sweet,” says Centeno. Lacto-fermentation, the same lactic acid enhancer in sauerkraut, gives dimension to the hot sauces splashed onto rice bowls at Sqirl and smoked chicken wings at Maple Block Meat Co. Fermented quinoa and fenugreek recently began starring in the tangy batter used in the uttapam pancakes at Akasha Richmond’s Sambar.

“As ingredients mature, they deepen, just as people do,” says Uh. “But too much aging can result in something rotten—same with people. With both, a caring environment is the most important factor.”

Where To Get It
Baroo
5706 Santa Monica Blvd., Hollywood, baroola.strikingly.com