Home Dining The Fascinating Story Behind L.A.’s Oldest (and Only) Floating Restaurant 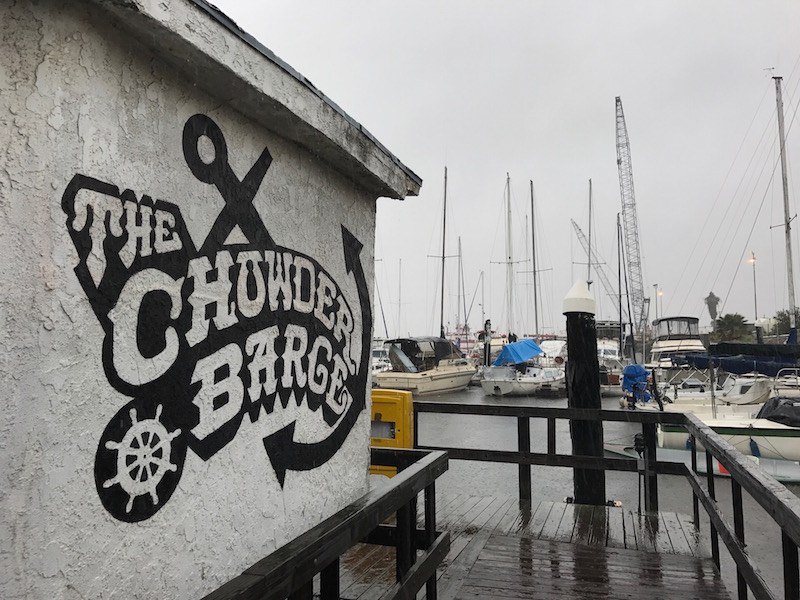 Have you ever seen the 1935 film Mutiny on the Bounty?

It’s okay. I haven’t either. But from Wikipedia I learned it was a critically beloved swashbuckling adventure starring Clark Gable (just look at those screenshots!), considered “one of the biggest hits of its time” and filmed in such exotic locales as French Polynesian, Catalina Island and Culver City. Its most iconic scenes were shot aboard the Commodore II, a four-masted schooner that would, a decade later, end up smashed to bits against a reef during a squall off the Cape Town coast. The film itself would be remade twice, once in 1962 starring Marlon Brando, and again in 1984 with Mel Gibson. I would assume Hollywood executives are weighing its reboot potential at this exact moment.

These details are mostly unimportant, except for one. During filming of the 1935 original, a large wooden barge was constructed to act as a support vessel, used to hold cameras and other movie-making equipment. After the film was completed, the barge was docked in Long Beach and mostly forgotten, enjoying brief stints as a Catalina Island shuttle, a houseboat, a brothel (allegedly), a machine shop, and finally and most importantly, as a restaurant specializing in thick, creamy Boston-style clam chowder.

To appreciate the gritty appeal of The Chowder Barge, a 40-year-old watering hole anchored at Wilmington’s Leeward Bay Marina, you must first understand how to get there. After navigating through the industrial sprawl of the greater Port of Los Angeles — mountains of rust-colored cargo containers, steel truss bridges, chemical-belching refineries, parades of Union Pacific freight, heavy The Wire season 2 vibes — you come upon a narrow access road that leads to Leeward Bay, a small private dock located at the mouth of the runoff-spewing Dominguez Channel (or as “live-aboard” boat residents lovingly refer to it, “where the sewage meets the sea”). You snag a parking space; stroll over the gravel embankment and down a rickety aluminum ramp that deposits you at the foot of a big floating block of concrete surrounded by sailboats with peeling paint. You have reached the barge.

It would appear appropriate at this point to tell you that the clam chowder at The Chowder Barge is shockingly delicious, a creamy old-fashioned stew soulful enough to bring a tear to the eye of a grizzled sea captain or Hemingway stock character. The truth is that it’s somewhere between decent and good, thickened with an absurd amount of flour and noticeably smoky from copious amounts of chopped bacon. The clams are frozen, the potatoes are soft and there is probably celery in there somewhere. A few shakes of black pepper and Tabasco are helpful. You certainly wouldn’t mistake this for the briny, lush chowder Michael Cimarusti serves at Connie and Ted’s, but it does have a distinct stick-to-your-ribs heartiness, which explains its popularity among Long Beach locals. For a few dollars extra you can have your chowder topped with a handful of deep-fried clam strips, which is a great idea, or served inside a pale loaf of sourdough, which like all bread bowls is a terrible idea (better to order a side of garlic toast for the same price). There is also the Rev’s Special, essentially a plain cheeseburger drowned in chowder. The mental image of a soggy chowder-soaked burger might excite certain people (me), but it turns out the idea is better in theory than practice. There are other diner provisions on the barge’s bill of fare — chili-cheese omelets, tuna salads, fried seafood baskets, grilled ribeyes, spaghetti on Thursday nights — but you are mostly here for chowder. Or chowder and a frosty Captain’s Mug of Budweiser. And maybe a soju Bloody Mary after that. With all due respect to the hardcore chowder heads out there, I’d imagine the unique charm of the barge has less to do with food and more with atmosphere. Heavily nautical in theme, with a splash of tiki thrown in for good measure, the barge is as if Kurt Russell’s Captain Ron finally settled down and opened his dream bar, all ships brass, polished wood and year-round Christmas lights (the restaurant revived its Hollywood roots briefly in 2014, when it appeared in a scene from Paul Thomas Anderson’s Inherent Vice). Bathrooms are labeled “Inboards” and “Outboards,” and above the urinal a sign politely asks guests to not spit chewing tobacco into the toilet. The waitresses, bless them, are affectionately curt; the line cook makes due with a kitchen too small for an Allied submarine. On any given visit, you will encounter at least one longshoreman (yes, they’re still called that) and will be regaled with at least one gnarly boating tale. It is a wonderful place to waste an afternoon.

The original owners of The Chowder Barge were Lisle and Mary Panter, a couple whose presence looms large in barge mythology, although their children eventually sold the restaurant to the former waitress who owns it today, Nyla Olsen. In the late 1960s, the Panters purchased a dilapidated barge (our barge) and retrofitted it with a long U-shaped bar, wooden booths and a slick mid-century fireplace that hangs in the middle of the dining room. Their newly christened floating restaurant became popular with boaters, dockworkers and other bearded local color. A few years into operation, though, Mary Panter noticed her barge was sinking. “We thought we lost her,” she told the Los Angeles Times in 1976, ”the old timbers on the bottom just disintegrated.” To save their chowder-slinging barge, they limped it down the waterway to San Pedro, where its bottom was reinforced with concrete and steel mesh. Ever since, the barge has maintained a slight lean to the starboard side, apparently caused by the heavy beer kegs stacked in one corner. The dining room’s angle of list, to use a nautical term, is perceptible enough to cause a slight wobble in the gait of first-time patrons, although the beer itself could also explain this effect. It’s worth mentioning that the historic Chowder Barge wasn’t always located in Wilmington, the place where it currently berths. Its previous home was along a main stretch of the Long Beach Channel at the West 7th Street Landing, docked at the foot of an industrial dead-end street several blocks due west of downtown Long Beach. Back then you could linger on the patio and watch the enormous cargo freighters drift by, or better yet, tie your dinghy to the sail-up window and drink from the comfort your own private vessel (the sail-up window, sadly, was boarded shut by the fire department in the 70s after someone pushed a piano into the channel). In 1988, the barge was ousted from the West 7th Street Landing to make room for an expansion of the Port of Los Angeles, later relocating to Leeward Bay Marina, the slip with the cheapest dock fees anywhere in L.A. County.

Perennially overlooked and unglamorous, Leeward Bay has been an ideal home for one of L.A.’s strangest and most unsung blue-collar treasures, at least for the time being. Growing demands from the economic powerhouse that is the Port of Los Angeles have meant that many of the smaller marinas in the area are being considered for relocation or extensive redevelopment, which could eventually cause docking fees to become unaffordable for current tenants. It is unclear who would serve warm chowder and cold beer to a certain, forgotten segment of ocean-going society if the restaurant were no longer in business, although it’s probably premature to even speculate. I doubt it will be moving anytime soon, and if it does, it won’t be the first storm the barge has weathered.