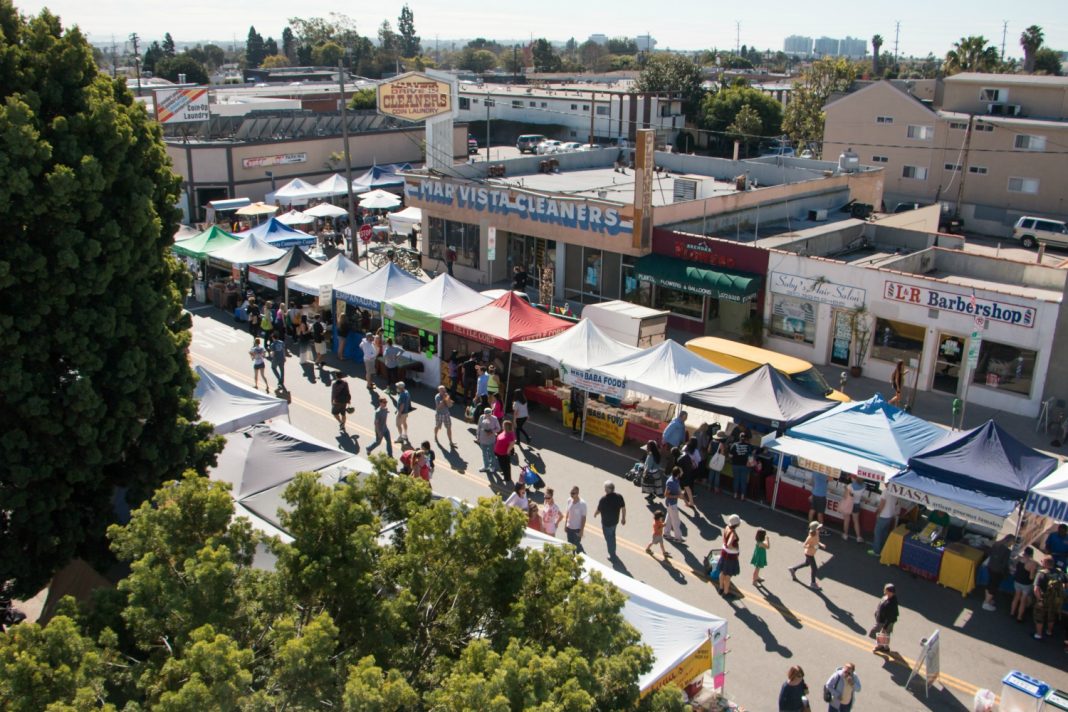 Angelenos crowded into the Brentwood Farmers Market over the weekend—and many didn’t seem to be abiding by the six feet rule.

A photo that was widely circulated on Twitter showed a packed plaza with throngs of shoppers gathered around stalls and milling about.

Some were incensed by the public assembly, calling it dangerous and irresponsible. “They are risking our lives for organic nut butter!” one Twitter user wrote. Katherine Schwarzenegger even weighed in, imploring Mayor Eric Garcetti to clamp down on markets in addition to the beaches and hiking trails that have been shut down in an effort to curb new coronavirus infections.

The farmers markets in Brentwood still being open seems like a huge issue when it comes to social gatherings 🙏 https://t.co/j7lMGtdVlf

On Monday, the mayor took aggressive action to limit social contact at these open-air markets. “We have seen images of dangerously crowded farmers markets—so I’m announcing the temporary suspension of farmers markets pending City review of physical distancing plans needed to keep communities safe,” the mayor wrote on Twitter, adding that the city would review plans immediately so that markets can stay open this week.

We have seen images of dangerously crowded farmers markets –– so I’m announcing the temporary suspension of farmers markets pending City review of physical distancing plans needed to keep communities safe. We will review plans immediately so markets can stay open this week.

Farmers markets have been deemed “essential services” in the eyes of the county, but organizers are supposed to find ways to stagger their crowds. At the Torrance Farmers Market, for example, stands are placed ten feet apart, there’s only one entrance and exit, and the line to get in is managed by staff, according to the L.A. Times.

The county’s official guidelines for markets also mandate that only “whole uncut produce and packaged food” can be sold (i.e. no prepared food), hand washing stations must be provided to customers, and sampling is strictly forbidden.

Raw Inspiration, the organization that runs Brentwood’s Farmers Market along with markets in Calabasas, Downey, Melrose Place, and Larchmont (among others), announced on their website on March 13 a list of “immediate changes” they’d be making to the way farmers sold their wares, including requiring vendors to use gloves and hand-washing stations, installing signs telling patrons to avoid touching their faces, and changing their layouts to accommodate for better social distancing.

“Each of the above items are in addition to the recommendations of the California Department of Public Health,” the press release reads. Raw Inspiration added that their markets operate in “a low-risk, open-air environment,” and provide “fresh produce rich with vitamins & nutrients essential to maintaining a healthy immune system.”

Farmers markets have become even more important to local farmers during the coronavirus crisis, as wholesale orders from restaurants dry up and shoppers opt for packaged goods.

But farmers now have to worry about potentially infectious customers. At the Santa Monica Farmers Market, some stands have erected barriers to socially distance sellers from buyers. Many vendors are also bagging the produce themselves.

On social media, some observers called out the LAPD for allowing residents of Brentwood, a predominantly white and upper-class neighborhood, to amass in large crowds while sending a battalion of officers to break up a children’s birthday party in Hyde Park.

Other Twitter users came to the defense of L.A. farmers markets, saying that many shoppers and vendors were adhering to social distancing measures and that the Brentwood crowds shouldn’t cast them all in a negative light.

This is Echo Park Farmers Market. Don’t judge all markets in Los Angeles since Brentwood can’t get it’s self together. I was at the market Friday just to get what I needed, then went home. That’s what people are doing. Getting fresh food & going home! pic.twitter.com/zOHhhXqnK0

“This is Echo Park Farmers Market,” one tweet read. “Don’t judge all markets in Los Angeles since Brentwood can’t get it’s [sic] self together. I was at the market Friday just to get what I needed, then went home. That’s what people are doing. Getting fresh food & going home!”

RELATED: People Are Pitching In to Help L.A.’s Independent Restaurants and Their Workers (and So Can You)