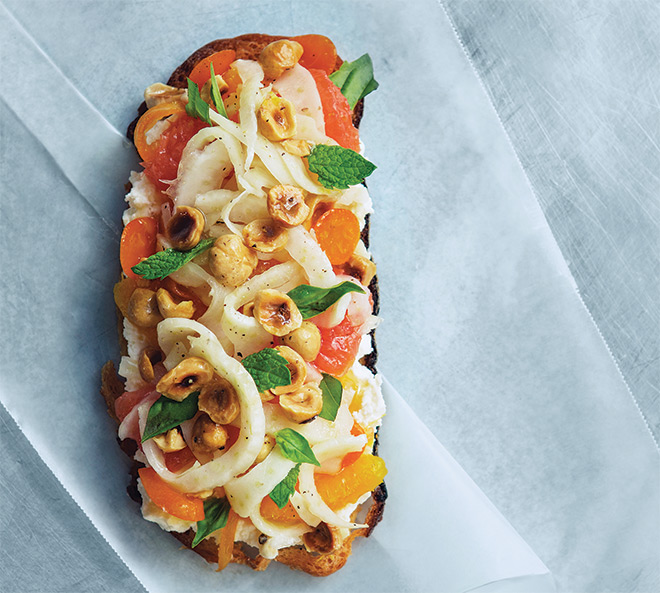 Please excuse us: Toast is the toast of the town. Media outlets from The New Yorker to Pacific Standard to This American Life have tried to dissect the confounding sensation that is gourmet toast. Hopelessly twee? A cinnamon-dusted symbol of America’s economic disparity? A crusty harbinger of societal doom? Whatever their meaning, creatively topped breads have finally made it to L.A.—a year or more after they debuted in the grittier coffee shops of San Francisco. You can find burnished slices starring at restaurants like Hinoki & the Bird, Salt Air, and Sqirl. “A layer of ricotta with kumquats, torn basil and mint, and a sprinkling of hazelnuts? That wouldn’t make a great sandwich, but it lends itself well to toast,” says Karen Hatfield, who serves a variety of thin, crispy toasts at her casual Sycamore Kitchen. Hatfield admits that her crunchy offerings are essentially French tartines given a familiar name. “Not to gender-stereotype,” she says, “but I just can’t eat a full sandwich.”

That the fancy toast phenomenon began up north makes sense; the revival of breadmaking in America also took hold there. At local spots where bread has become a focus, it’s not surprising to find thick slices piled with tony ingredients. Superba Food+Bread uses house-baked pain au levain for slivers of testa, or head cheese, and, in spring, for white asparagus. “It’s about giving people something that’s comfortable, but then putting things on it that take them out of their comfort zone,” says chef Jason Travi.

Ambitious toast first popped out at Sqirl, where Jessica Koslow based her early menu on inexpensive staples to complement her line of jams and preserves. “Toast was the natural trajectory of what I do,” says Koslow. But for her it was also about supporting the sudden swell of food artisans for whom a retail-only business model is tough to sustain. “How can we take all these cottage foods to the next level? You have to take it beyond the jar to the restaurant.

Open Wide: Where to Get It