Home Uncategorized Exclusive: What To Expect From the Houston Brothers’ No Vacancy 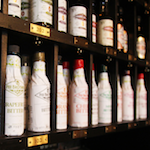 Nightlife impresarios Jonnie and Mark Houston (aka the Houston Brothers) are fans of the slow reveal, be it an intriguing speakeasy-inspired entrance or the burlesque shows at their bars Pour Vous, Harvard & Stone, and La Descarga. But the same applies to the opening of their newest venture in Hollywood, No Vacancy at the Juniper Hotel.

The 3,400-square-foot, three-level bar which took over the 111-year-old Janes House, the last Victorian residence in Hollywood, has unofficially been open for awhile. L.A. cocktail guild the Sporting Life hosted its 5th anniversary there in March, K-Stew and R-Patz crashed a record party there in April and then there was a vegan pop-up the first week of June. But No Vacancy will finally open its doors to the public for the first time this Saturday.

I was able to sneak a peek yesterday and I won’t reveal too much. Going over the fun details of a Houston Brothers’ bar is like giving away the surprise ending of a movie. But yes, there is a secret entrance—it is incorporated seamlessly into the historic space. The Houstons and their designers were careful about preserving the history of the building, focusing more on restoring rather than replacing with flocked wallpaper, cement tiles and gas lamps. Decor like a ‘30s-style white marble bar on the patio, a 1940s mechanical horse and hotel lobby mail slots further the time travel experience. A gift shop (complete with the occasional psychic on duty) and an innovative phone booth/photo booth keep up the hotel theme.

The only aspect of the venue they were allowed to go to town with was the courtyard. It had previously opened up to neighboring Secret Hookah Lounge and Tekila in Janes Square. A 17-foot-high brick wall was built to enclose the space, turning it into a private outdoor patio. “And now you have this beautiful courtyard which I feel transports you out of modern-day Hollywood to Hollywood in the ‘20s,” said Mark. With its own bar, fireplace, and cozy seating it’ll be the best spot for cocktails and conversations. Yes, that’s even during burlesque Fridays and Saturdays, porch session bands on Wednesdays and a tightrope walker show.

Inside the “hotel” will be more like a house party with DJs and dancing at the main bar area and second floor. The not-yet-opened third floor will house an R&D bar similar in concept to the one at Harvard & Stone. Guest bartenders will take over that intimate space, which has been described as being of miniature Varnish proportions, requiring one guest in and one out.

But the star of the venue is its 12-drink menu ($10 to $13), whose list of creators reads like a who’s who of the craft cocktail scene. The 12 bartender contributors, lovingly nicknamed “The Dirty Dozen,” will change as the list is updated seasonally. But the inaugural dozen includes Marcos Tello (Invention), Jim Meehan (NY’s PDT), Dave Fernie and Devon Espinosa (Pour Vous), Alex Straus (Hemingway’s), Adrian Biggs, Julian Cox (Bestia), Damian Windsor (Roger Room), Simon Ford (The 86 Co.), Dushan Zaric (New York’s Employees Only) and No Vacancy bar manager Sean Hamilton and bartender Francois Vera.

Playing on the theme of the Juniper Hotel, gin is the spirit of choice; showcased in seven of the 12 cocktails and complemented by housemade tonics. The complete drink list with names still wasn’t ready at the time we posted but here are a couple of the cocktails to give you a taste.

Now if you figure a Houston Brothers venue in Hollywood will have a strict dress code, you figure wrong. “We’re in the middle of Hollywood and if people paid $10 to park, they can literally throw a stone and hit 15 different bars from our location. So it behooves us not to be those mixologists with the pretension but just to be hospitable bartenders,” said bar manager Sean. The bar’s web site simply “discourages” attire like shiny shirts, shorts, and loud colors.

“I’d like to think of it as a boutique hotel. And in hotels, hospitality comes first,” said Mark. “[No Vacancy] encompasses all the strengths and all the amazing things from each one of our places.”

The bar’s hours are Tuesday through Saturday, 8 p.m. to 2 a.m. You can check out any time you want, but you may never want to leave.