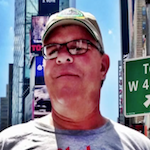 Lance Rice is a 55-year-old beer historian with autism. His photographic memory and passion for brewing history have earned him the title, “The Rain Man of Beer,” and you can meet him as part of his first trip to Los Angeles, conveniently taking place during L.A. Beer Week.

Lance has long dreamed of writing a book about beer, and his nephew, Aaron Rice, is helping to make it a reality by taking Lance to breweries around the country. Aaron, a Los Angeles-based filmmaker, is also making a documentary out of the journey called Lance’s Brewery Tour, which he hopes will capture what he calls “the beauty of autism” and inspire others to chase their dreams.

The project’s webpage sheds a little more light on how this trip is already having an incredible impact on Lance, and how his courage in overcoming adversity just might have a profound effect on all of us:

“For Lance, his nationwide brewery tour is the first time he has left home without his mother or a guardian figure. In fact, it’s the first time he has faced his fears and abandoned the routines that help Lance cope with life. For anyone who understands autism, these feats are more than breakthroughs—they are miracles. What’s even more astonishing is Lance is doing all of this at 55 years old.

At an age when most people give up on development, Lance is experiencing the most rapid period of emotional, cognitive and personal growth in his entire life. To fully understand Lance’s autism, as a child he wouldn’t leave his home, would not speak, and was institutionalized. Now fast forward half a century. Lance began his brewery tour just over a month ago and in that time he tackled claustrophobia, a fear of heights, social phobias, initiated a conversation with a stranger for the first time and even addressed a crowd. For those touched by autism, Lance represents incredible hope. He is an adult who is embracing autism, achieving a dream most thought was impossible and inspiring countless people as he journeys—and he’s doing this one brewery at a time.”

Now on the West Coast leg of his tour, Lance will be hitting several L.A. bars and breweries, and you’re invited to come share a pint with him; a portion of beer sales at each event will go toward the film and book project as well as “Lance’s Room,” a charity started by Lance and Aaron to help make wishes come true for others with autism and to provide support for families affected by autism.

[Full disclosure, author Randy Clemens is doing a bit of promotional and organizational work for L.A. Beer Week 2013, though it does not involve these specific events.]