Home Uncategorized Exclusive: Dave Whitton is Bringing Whiskey Back to the Sunset Marquis 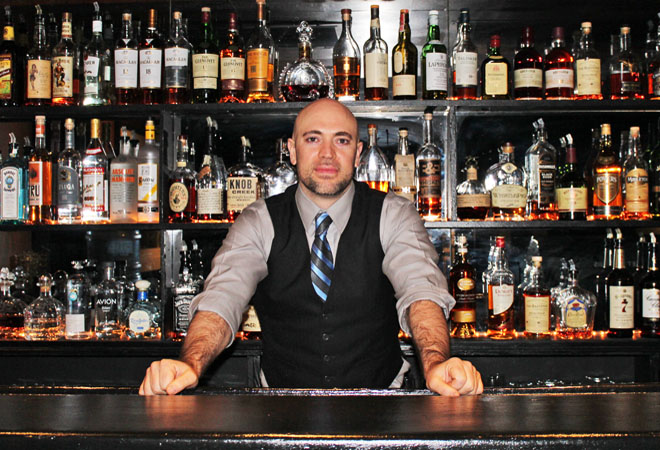 You heard right. Barman Dave Whitton, formerly of Villains Tavern and the six-month pop-up in San Diego, Frauds & Swindlers, has taken over the cocktail program at the Sunset Marquis off the Sunset Strip. Those who have followed his career know this is a match made in booze heaven. After all who better to bring whiskey back to this rock-’n-roll haunt than a former musician who was schooled at Seven Grand?

Dave took me on a tour of the four bars of the hotel while giving me a rundown of things to come, including his cocktail plans for the newly opened Cavatina. “I’m hoping by March 14th, all [the bars] are up and going,” he said.

Bar 1200: The bar formerly known as the Whiskey Bar, when it was run by Mr. Cindy Crawford aka Rande Gerber, will be whiskey focused. It never was before, even with its old name. But now its entire back wall will feature a small, handpicked selection of whiskies: bottom shelf will be bourbon, middle shelf Irish and rye and top shelf scotch. And it’s not going to be the biggest collection due to space constraints but “It’s definitely going to be geared toward my palate,” said Dave. And yes, there will be other spirits like vodka, gin, and tequila, but they’ll be “hidden.” As for the cocktail list, which will be seasonal: “There’s going to be two Old Fashioneds, three Manhattans, two Juleps..a couple of sours and five original cocktails” said Dave. “The majority of this stuff is going to be whiskey forward.”

Architecturally speaking, Bar 1200 will go through a light polishing rather than major renovation, according to Dave. “I’m going to re-light it. We were thinking of mirroring out the patio so you can see it. But for concept purposes right now that’s probably a month to a month and a half away before we dig into that.” They’re not looking to do drastic changes here. After 50 years, the hotel’s clientele knows what they want and what they’ve come to expect. “Every person who comes here, the rockstars, they love how this place is. They don’t want it to change. The hotel has a huge regular base. They don’t want Sunset Marquis to change from what it is which is a privately owned boutique hotel.”

Dave is still fine-tuning his menu, which he anticipates will debut in the first week of February, but here’s a sneak peek. By the way, looks like the drinks will range in price from $15 to $18.

Cavatina’s Bar: The restaurant bar’s cocktail menu will launch in mid-February and unlike Bar 1200 will feature solely original cocktails, and will complement Chef Michael Schlow’s dishes. “[Chef] uses a lot of nuts, smoked stuff, so it actually makes it really easy to make drinks for him. They’ll have more depth,” he said. “I’m going to run with some salt, some smokes, definitely start and research spirits, finding new stuff that I feel are really going to add to the development of the menu itself.” He couldn’t get more specific since he’s focusing on Bar 1200’s menu first, however.

Poolside bars: The Sunset Marquis has two poolside bars; one located off the lobby and another, the Villa Pool, across from Cavatina on the mezzanine. In the past they have been used for events rather than for lounging, with the occasional room service attendant recruited to serve drinks. But Dave’s cocktail menu, which he plans to release in March, will make these overlooked areas a warm-weather drink destination. Think: 10 or 12 seasonal Tiki-style, fruit-oriented cocktails. Pool bar hours will probably be 10 a.m. to 5 p.m., and then Cavatina will take over at 8 p.m. Eventually Dave hopes to bring in live music to the Villa Pool as well as grow a garden for fresh cocktail ingredients.