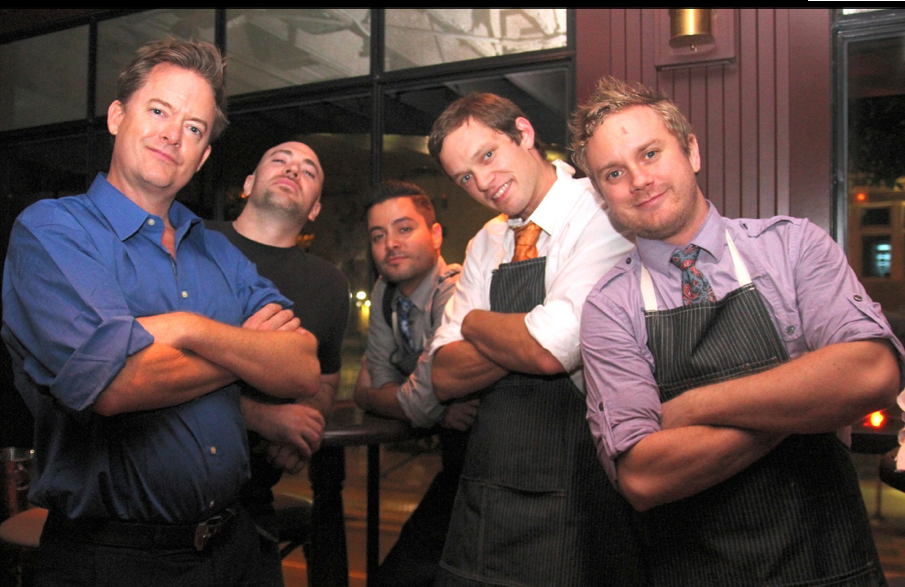 Aidan Demarest, owner of Neat in Glendale, is moving down to San Diego! Oh noes! What’s L.A. going to do without him? Well, actually, he’s just renting a house so he can commute to SD three nights a week and be closer to his brand-new bar Frauds and Swindlers in the Gaslamp Quarter. And, no, it’s not yet another bar he’s consulting on like LAAC’s Invention. For a long time Aidan had been considering opening up a second bar and San Diego was the place. A great idea since the town is growing as a cocktail destination what with Seven Grand San Diego, Noble Experiment and the much-talked-about Polite Provisions.

“I love San Diego. I spent a lot of time in San Diego,” said Aidan. “Keating Hotel [where the new bar is opening] is the heart and soul of the Gaslamp Quarter so there’s this huge walk-through-traffic happening in that space and it’s been awhile since the Spare Room where I’ll be smackdab in the middle of everything. It means we’re going to deal with fresh consumers. Like back at Seven Grand when we were dealing with people who never ever tried it before. My interest has always been reaching out to consumers, not necessarily making great drinks for bartenders.”

The details of F&S are still not set in stone: the place is still under construction, there aren’t any photos or up-to-date artist renderings, no employees hired or a drink list to speak of, but Aidan shared the basics with me. He partnered up with Dave Whitton (formerly of Villains) on this 7,000-square-foot space in the historic Keating Hotel building which will not only have a bar “as long as a bowling lane” but a stage for live performances (bluegrass and country rock) five nights a week as well as a smaller upstairs bar called “Two Fingers” as in two fingers of neat whiskey. Yup, that will be Neat 2 and specialize in only serving neat spirits. Dana Hollister, the designer behind Villains and One-Eyed Gypsy, is designing the venue.

Next door will be a pizza-by-the-slice shop, called The Italian Next Door, where hungry drinkers can order up and enjoy their ‘za with their cocktails. The pizza shop was originally called The Crust and served as a big after-hours space for the neighborhood having stayed open til 4 a.m. and Aidan hopes to bring that back.

In terms of the cocktail situation, the boys are still getting the list together but aim to have 15-20 cocktails available. “I want to start out with a broad list. It’s a bigger space so we’re going to do volume cocktails,” Aidan said. The building was opened in 1895 so the cocktails will be circa 1890s and simple like shrubs and juleps. “We’re going to lean toward tropical, not necessarily Tiki but definitely tropical. It’s going to be much more simpler drinks so we can deal with live entertainment, etc. Dave is one of the best volume bartenders and he really did a great job with Villains.”

Aidan aims to open the bar by August 5.

This Is the Cheapest Transit Option Between L.A. and San Diego—But It’s a Long Haul