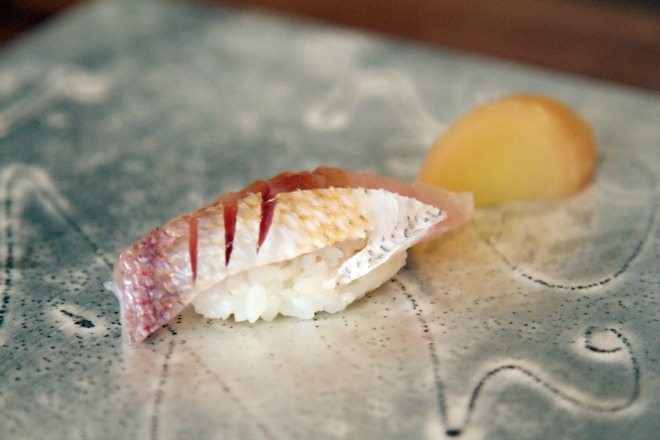 For sushi purists, the Edo period (1603—1867) is the only era that matters. One of L.A.’s newest sushi restaurants pays tribute to that epoch: Q by Chef Hiroyuki Naruke opened to the public last Friday, November 15. Here, old school sushi is the rule, not the exception.

The city of Tokyo was once known as Edo, which is where sushi as we know it today was born. Nigiri, the hand-formed bundle that joins a thin swath of fish from Edo Bay with a small cluster of vinegar seasoned rice, was all the rage back in the day. It was fresh, fast, inexpensive, and delicious. No wonder it flourished.

Locally sourced seafood is emphasized here, marrying Old World techniques with New World ingredients. Uni, or sea urchin, sourced from San Diego and presented gunkan-style is a prime example of Hiro’s style. His preparation of the sea creature renders it creamy beyond reason; its oceanic flavors shine through without the slightest bitterness.

Within the 20-course omakase experience you may get a taste of the unfortunately named idiot fish. This fish also goes by a (slightly) less demeaning and more descriptive moniker: shortspine thornyhead. Served as a nigiri, this idiot is surprisingly shrimp-like with firm, snappy flesh. A soft sweetness comes through despite its dimwitted nickname.

Actual time travel may not yet be an option, but for an Old World sushi experience, look no further than downtown’s new Q by Chef Hiroyuki Naruke.