Home Uncategorized Everyone’s Favorite Rooster Sauce Gets Its Own Movie 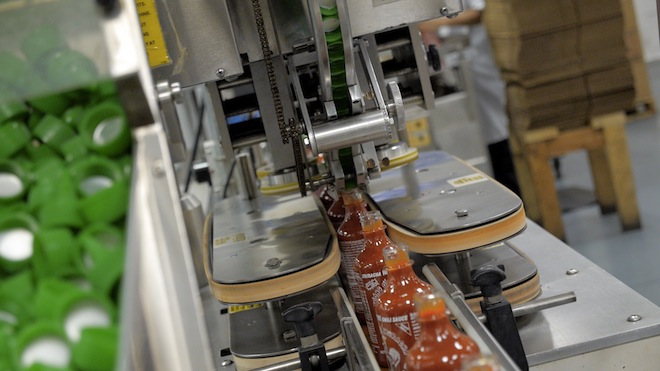 When we first heard that there was going to be a film made about Sriracha, that spicy Thai sauce with a rooster on the label, we knew we had to talk to Randy Clemens. Full disclosure: Clemens used to run this blog, but we already knew he had a bias towards Sriracha because he’s the author of the one and only cookbook on the subject. He’s soon to release a sequel to the first book, called The Veggie-Lover’s Sriracha Cookbook (stay tuned for more details on that). Suffice to say, the man knows his rooster sauce.

It was only a matter of time before Mr. Sriracha Movie, Griffin Hammond met up with Mr. Sriracha Book, Clemens.

“A while back, Griffin sent me a message asking if I had a few minutes to chat with him about the Sriracha documentary he was hoping to put together. We eventually got together to chat over a Google+ hangout and I was really excited to hear about what his plans were. He said he was going to be coming out to L.A. and asked if I’d be interested in being part of it and if I’d be able to put him in touch with some Sriracha-minded people here in town. Naturally, I was stoked and honored to be included, and I helped direct him to the fine folks I’ve chatted with at Huy Fong Foods, makers of the iconic “rooster sauce” that we all know and love, as well as Jet Tila, the official U.S. Culinary Ambassador of Thai Cuisine.”
Clemens says that Griffin went on to tour the Irwindale-based Huy Fong Foods factory and even visited Underwood Family Farms in Moorpark, which grows all of the red jalapeños that Huy Fong uses for its sauce.
Clemens goes on: “I went with him around town to source some of these bottles and ended up leading a Sriracha tasting with him on-camera so that he could taste eight or nine varieties for himself, including a little jar of extra-spicy homemade Sriracha I had on hand that I’d made with Serrano chiles.”
Oh, what we’d give to taste that little homemade bottle…
The Sriracha Movie by Griffin Hammond is coming to theaters this September 2013
The Sriracha Cookbook, official site