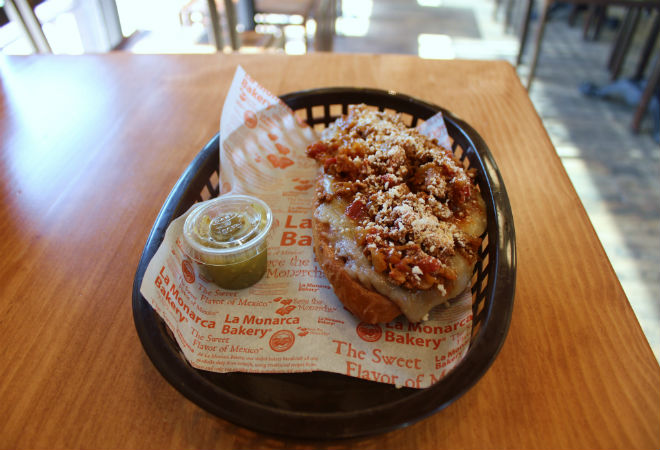 For months I’ve been walking by the corner of Sunset and Gower waiting and hoping for the Hollywood La Monarca Bakery to open and bring a little Taste of Mexico (La Monarca Bakery is one of the founding members of the Taste of Mexico Association) to my neighborhood. La Monarca Bakery’s fifth location just had its grand opening this past Friday, joining an already blossoming casual dining scene in Hollywood.  Now there’s a local spot for iced café de olla (cinnamon-spiked coffee), natural and tasty Mexican pan dulce (sweet bread), and savory items like quiche ranchero (real cowboys eat quiche!) and tortas.

The tortas, and open-faced tortas (known as molletes), are served on the fine house-made bolillos (bread rolls) and have a selection of fillings that include a vegetarian chorizo, which came about because owner Ricardo Cervantes wasn’t happy with the level of grease in the various Mexican pork chorizos he tried. Well, what’s the harm in a little grease—maybe I should go with the mole instead?

La Monarca Bakery’s vegetarian chorizo open-faced torta wasn’t my first choice, but I thought I should take one for the team: team vegetarian.  It’s a soy-based chorizo cooked into a delicious stew with tomatoes, onions, and mild spices. The spread of refried beans underneath is also free of any animal deliciousness, though as far as the cheese on top, it’s a molten northern-style asadero, a preferred melting cheese that’s pure, cow’s milk bliss. A finish of fresh, salty cheese is sprinkled on top of the open-faced sandwich. While this isn’t a 100% vegan torta, it’s a healthy and delicious Mexican sandwich that puts the spotlight on the reason you came here—the bread.