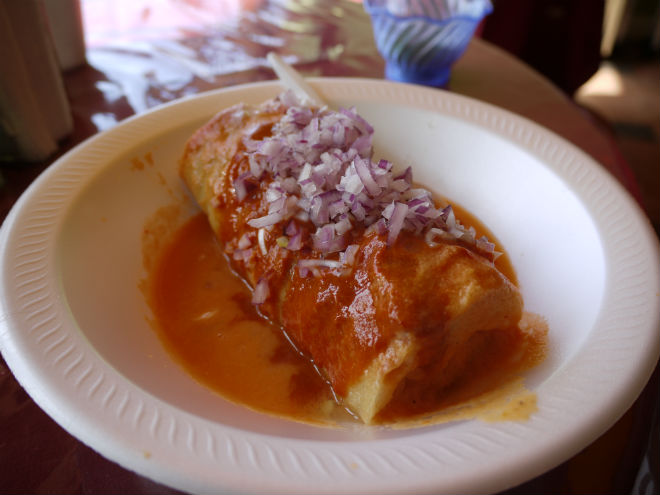 When I passed by Vineland Avenue in North Hollywood the other day, I was startled to see one of my cheap-eats picks, Raspados NoHo, already replaced by a new restaurant. The kitschy art on the newly painted exterior featured three pot-bellied caballeros, or los tripones, and loomed over a tempting ad in the window for tortas ahogadas de camaron, a Guadalajaran “drowned” sandwich filled with shrimp. Upon further investigation, I was relieved to learn Tortas Ahogadas Los Tripones is run by another member of the Raspados NoHo family—their original location was Tortas Ahogadas Beto, which opened in 1997.

The rules of engagement are: Choose your level of heat—hot, medium, or mild—from the fiery Yahualica varietal of chile de arbol. Non-Latinos may have to insist on making it hot, but do persist, because if your forehead isn’t sweaty and your mouth and fingers aren’t stinging, then you aren’t experiencing the pain and pleasure of one of Mexico’s most famous tortas.

Most important is the birote, or pan salado (hard roll) as it’s also known, which maintains its durability even after being drowned in chile sauce. A layer of boiled shrimp, doused with the same salsa that’s been blended with shrimp stock, is stuffed between the bread roll for pure deliciousness at one of the few places doing this version of Guadalajara’s greatest hit. I’m glad it’s still around.