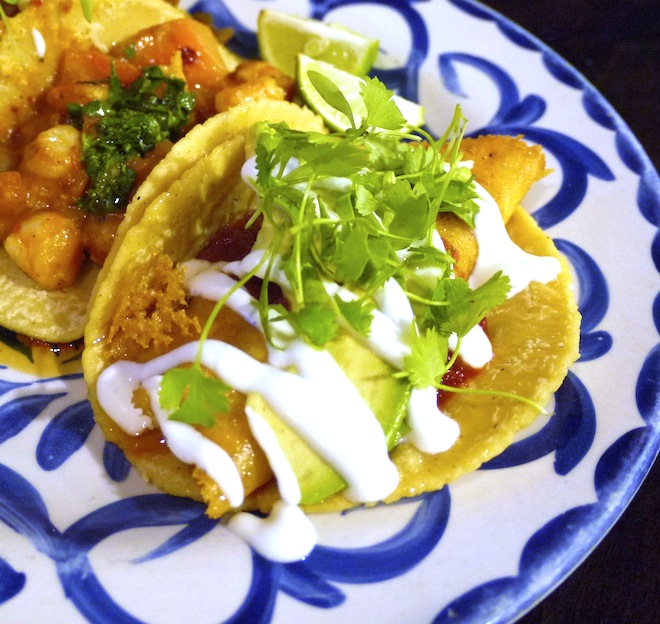 For several years now, Andrew Lujan and his wife have been vacationing down in Baja, and staying in the Valle de Guadalupe. These trips have influenced the menu at Cacao Mexicatessen, the restaurant in Eagle Rock that Lujan shares with his sisters. Since it opened in 2009, the Mexican-style deli has served creative Mexican cuisine developed by Lujan’s sister, Christy.

Cacao has been known for dishes like duck carnitas and a nice selection of vegetarian tacos, but the Baja influence on the menu is beginning to take over. Lujan is the first Mexican restaurateur in L.A. to bring back some of the real Valle de Guadalupe—which include Montefiori, Vina de Garza, and Casa de Piedra. Baja craft beers from the Tijuana Brewery and Cervezería Cucapá (Mexicali) are on the menu as well.

Lujan is also the first Angeleno to introduce the Tijuana-style quesataco to Los Angeles. Traditionally the quesataco is just a taco with melted cheese—it’s typical in the Baja peninsula and in the north of Mexico. It’s sometimes called a quesadilla con carne, and in Sonora it’s dubbed the caramelo. The Tijuana-style version was created by chef Javier Campos Guttiérez of the innovative taqueria, Tacos Salseados, located in the Otay Mesa neighborhood of Tijuana.

As in Tijuana, Cacao serves an envelope of fried cheese filled with the main ingredient—in this case, smoked salmon—atop a handmade tortilla, dressed with cream, salsa, sliced avocado, and a pinch of fresh cilantro. Fried cheese is a pleasure few can resist; fried cheese on a tortilla is will persuade the rest.