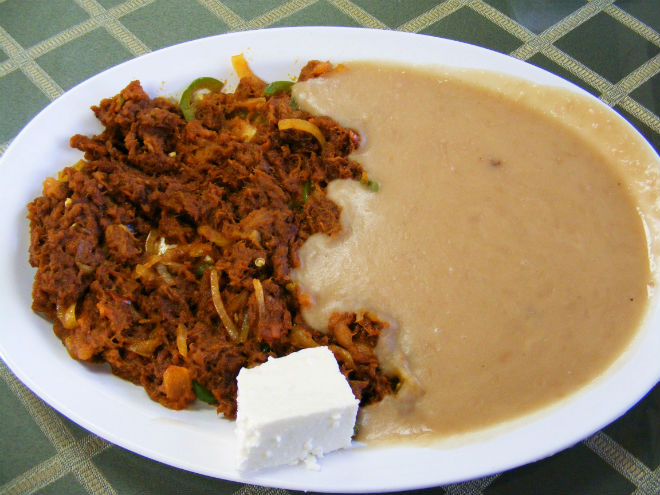 You may have already heard, but over the weekend, public enemy number one and leader of the Sinaloa Cartel, Joaquín Guzmán Loera, known as El Chapo (Shorty), was captured in a quiet condominium in the port city of Mazatlan, Sinaloa. Mazatlan is also is home to the largest commercial shrimp fleet in Latin America—you know, shrimp, shorty—get it?

El Chapo has been on the top of America’s Most Wanted list since the take down of Osama bin Laden. He’s been on the run for 13 years, and finally slipped up and was awoken early Saturday morning by D.E.A. agents and Mexican Marines in his home state. Sinaloa, also happens to be known for having one of the best seafood cuisines in Mexico, as well as an excellent land-based cuisine. It’s one of Mexico’s greatest surf and turf states.

One outstanding dish from Sinaloan gastronomy that you can enjoy in Los Angeles is the chilorio (El Chapo won’t get to taste this dish ever again, now that he’s locked away in the U.S. federal prison system) at El Sereno’s Sinaloa Express. There, shredded pork is slowly braised in mild, dried chiles and spices until it falls apart into a heap of juicy meat, flush with a dark reddish-orange stain.

You can order a plate of chilorio with creamy frijoles puercos, (refried beans in pork lard) and a small square of queso fresco (fresh cheese) with tortillas for making your own tacos. Or, just order a chilorio burrito.

Sinaloa Express one of a few newer Sinaloa-style cenadurias, or supper houses, that specialize in comfort foods called antojitos, or little whims. And now we can all take comfort in the fact that El Chapo is going away for good, so we can get back to talking about the best thing about Sinaloa: the cuisine.