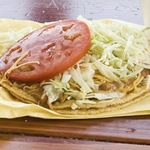 As we gathered this week with loving friends and family, I couldn’t help but think about Henry’s Tacos and the news of their seemingly imminent closure. The outpouring of support from longtime customers, fans, and celebrity for this San Fernando Valley fast food institution in recent weeks has been monumental. So much so that there’s a chance it may stay open after all, if a deal is reached with a prospective buyer. Elijah Wood loves Henry’s, George Lopez loves Henry’s, and so do the Breaking Bad players.  For many people, the Los Angeles-born crunchy ground beef and yellow cheese taco has been a part of their life.

In the south, it’s Tito’s Tacos, but for folks above Mulholland–it’s Henry’s ‘til you drop. But really, this style of food was—and still is—the mainstay of our taco nights at home, where bowls of Americanized taco fixings are spread out to be carefully placed into prefab taco shells, then spread shut with sour cream.  I don’t have this childhood attachment to Henry’s tacos, but did try them for the first time contributing to the recent Los Angeles magazine Cheap Eats issue. I found it surprisingly good, but what intrigued me the most was the seasoned ground beef “tostado.”

The tostado has to be a mispronunciation of tostada—circa 1961, when Henry’s first opened—that’s now become folklore. Just like their taco, it’s the tattered ingredients of a hamburger on a pre-made tortilla shell anchored by a spread of creamy refried beans and their signature taco sauce. With fresh iceberg lettuce and ripe tomatoes that are cut on the premises, Henry’s tostado almost appears to be an artisanal tostada when compared to its later contemporaries. (Did you know? Henry’s opened before the first Taco Bell).

No, this isn’t authentic Mexican, but just as Richard Nixon was able to open the door to China after a lifetime fighting communism, I’m telling you that Henry’s represents a vital piece of pocho (Mexican-American) cuisine.

While my homemade crunchy taco nights are gone (along with my Farah Fawcett t-shirt), every now and then, I hope to still be able to sit at the corner of Tujunga and Moorpark on a dry, 818, hot summer afternoon and sink my teeth into a tasty tostado, as hard taco shell shrapnel and shards of lettuce come raining down on my paper wrapper. Save Henry’s!