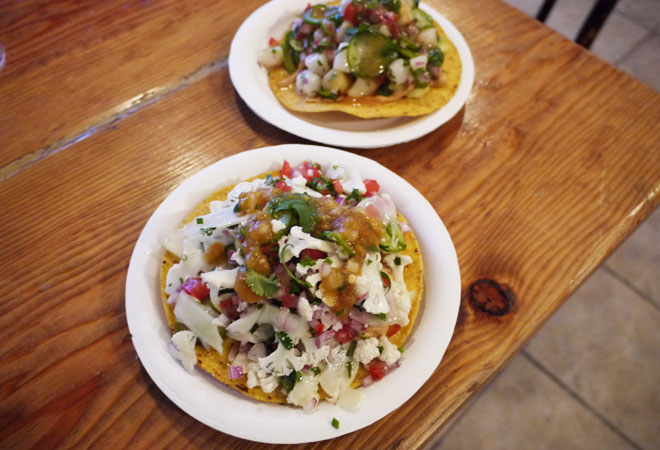 “A woman who works with us came back and was apologizing because I had to make tortillas,” says Gil. “I told her it wasn’t a big deal. One of our Mexican cooks makes them too, but we were told to make sure his father doesn’t find out.”

Besides defying cultural morays, the new Tacos Punta Cabras is contributing to L.A.’s new brand of pocho taquero, armed with a strong sense of Mexican tradition and modern technique.

The Santa Monica restaurant’s tostadas and fish and shrimp tacos are inspired by the legendary taco shacks in Ensenada as well as Baja’s contemporary culinary movement. Gil has roots in Sonora, Mexico, spends as much time as I do in Baja, California, so he understands the most fundamental principles of taco and tostada construction: There has to be a presence of moisture so that the whole dish turns into a sauce in your mouth.

Bay scallops are risky to serve raw—only firm pen shells are used in Mexico—but for their scallop tostada, Gil and Snukal spread some spiced cashew puree and sliced avocado at the bottom to pull the dish together. Then cilantro, tomato, purple onion, and pickled Persian cucumbers (Japanese style) are stacked on top of the lime-marinated bay scallops. Cucumbers provide the crunch, and the creamy base beneath the scallops plays to the strengths of the bivalve, while tempering its sometimes-unpleasant aftertaste.

The Westside keeps upping its taco game and bridging the great Mexican food divide that is the 405. As for Punta Cabras? It is simply the best taqueria on the Westside, and one of the city’s best contemporary Mexican restaurants—period. Just don’t tell their dads about the whole “making tortillas” thing….