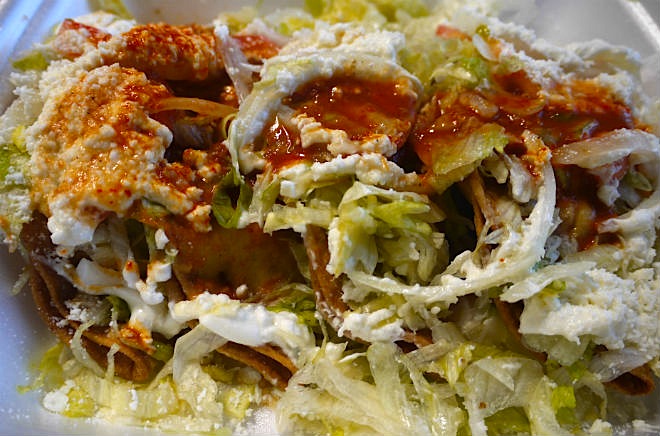 L.A. is definitely a crunchy taco town, from the Mexican-American yellow cheese devotees of Tito’s in the South, Henry’s in the North, to the fleet of trucks in Boyle Heights serving the more authentic crispy shrimp tacos, doused with a runny tomato salsa.

What’s missing is the more classical style of tacos dorados (literally, golden tacos) that are best represented in Jalisco, Aguascalientes, and other central states in Mexico. To make them, tortillas are stuffed with regional guisados made from potatoes or deshebrada (shredded beef), fried in lard, and then obscured by layers of shredded lettuce, onion, cream, and crumbled cheese.

Tortas Ahogadas Ameca is one of the fastest growing number of traditional Jalisco-style Mexican sandwich shops that specialize in fiery tortas ahogadas.  But the real reason to head down to this shoebox of a restaurant in East L.A. is for the tacos dorados. Every time, it takes me back to Ameca, a small town along the pilgrim’s route just east of Guadalajara.

You can get a number of fillings for these deep-fried tacos, but the potato tacos here are straight out of a Mexican fonda (small regional eatery serving economical cuisine and antojitos). This is most typically found in matriarchal kitchens—it’s home cooking at its best!

The tacos are smothered with an abuela’s embrace—a little extra cheese, lettuce, and salsa to make sure you eat well. The tacos themselves are crunchy, comforting passports to Mexico Lindo y Querido.

Tortas Ahogadas Ameca is yet another great Mexican restaurant in Los Angeles that has, until now, flown under the radar. Consider it another place to satisfy your addiction to the crunchy taco—except this time, it’s authentic through and through.