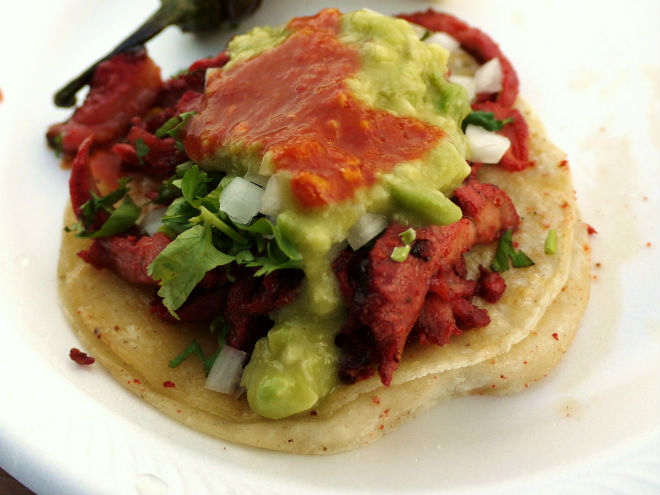 Finding true tacos al pastor in L.A., made from pork marinated in adobo, cooked on a vertical spit (called a trompo in Mexico) takes a team of forensic foodists dedicated to finding an ideal. There must be a vertical spit, the cook must be a seasoned taquero, and the product must involve a tasty marinade of chiles, citrus, spices, and colorants—both natural and artificial—that begs the eternal question: to piña (pineapple) or not to piña?

In Mexico City, Puebla, and the Yucatan—the big three al pastor destinations—a chunk of pineapple to accompany your hand-sliced pork on its journey down your gullet is practically law. While mostly associated with Mexico City, al pastor is found in every state in Mexico, though practices in respect to the piña vary. (For example, on the Baja peninsula it’s called adobada, and distinguishes itself by offering creamy guacamole as the fruit of choice.)

Most of the top trompo jockeys in Mid-City’s al pastor corridor adhere to the Mexico City-style. The best tacos come from the familial rivals, Tacos Leo and Tacos Tamix, which both share a source for top-notch Mexico-city born taqueros.

But the real battle is going down in South Los Angeles, in an area forming around a rectangular grid of spinning mounds of crimson pork that runs from below the 10 to the 105. I’ve been keeping an eye on them as the spring up, dotting the north-south avenues, streets and boulevards roughly between Western and Central.

On weekend nights, Los Panchos on Central and 49th does a nice Baja-style adobada, as does Tacos de Bombom down on the 84th block of perhaps the most trompo-rich drag in town.  In Baja, they like to sear the shaved pork on the griddle for a crispier texture, but just remember that when it comes to tacoing, you’re the boss. You want it directly from the spit? Just say so.

Tacos Leo still “trompos” them all, but each week, it seems another stand, or truck emerges under a stream of hazy, white Christmas lights to try and claim L.A.’s al pastor throne. And I’m not complaining—competition only breeds excellence.

People Are Panicking About a Potential Pork Crisis in California