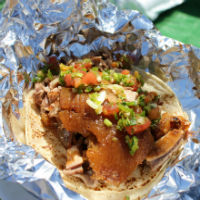 A huge crowd of taco enthusiasts showed up at Grand Park this past Saturday to celebrate the end of L.A. Taco’s annual Taco Madness. The online poll and festival devoted to the taco lifestyle is just as much a part of Los Angeles culture as the Dodgers, the Sunset Strip, and Tinseltown. This year’s attendees were treated to street food from some of the best taco slingers in town—both the tried and the new—along with a few surprises.

The online poll came down to the wire between past-winner Mariscos Jalisco and newcomer to Taco Madness, El Coralense—in the end it was El Coralense that rallied the most votes.

But it was Carnitas El Momo (which we first reported on here) that wowed the crowd and judges (full disclosure, I was one of ’em) with its sublime artisanal carnitas. They took home the Best in Show award and, according to event organizers, had the longest lines all day.

Mexicali Taco Co. took home the “best tortilla” award for its blue corn varietals by Flatev, whose Nespresso-inspired tortilla machine seemed to be having some technical difficulties. In the meantime, Tacos Puntas Cabras was the only stand making tortillas to order from fresh masa.

There were long waits for previous winners Mexicali Taco Co. and Mariscos Jalisco as well as Guerrilla Tacos, which has been one of the biggest stories on the taco wire this past year.

There were tacos for all tastes, and the party went throughout the day with music, micheladas by Guelaguetza, and plenty of dancing to work off all those tacos.