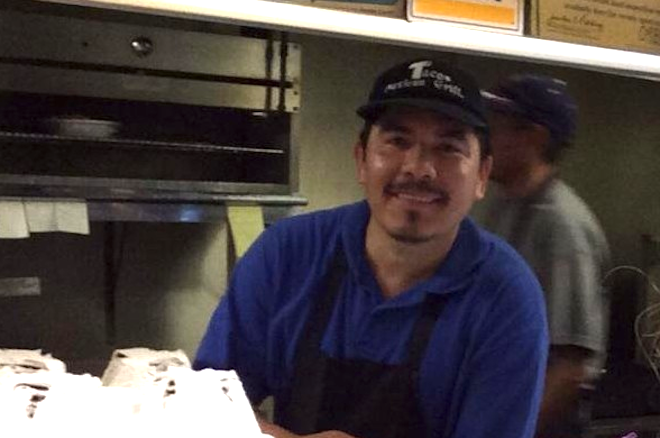 Last Wednesday in Westchester, T2 Tacos taquero Jesus Delgado foiled the attempted kidnapping of a four-year old boy in broad daylight. It’s a story that’s become an international tale of heroics: The media has described Delgado as a taco cook, but the kind, humble employee of the Mexican-American taqueria that’s been in the news is part of a brotherhood of taqueros, or professional taco specialists.

This week, the T is for taquero, and we are saluting the fast-thinking Jesus Delgado for protecting his customers—and serving them tacos.

Serving nachos, California burritos, breakfast burritos, and fajitas had already cemented Delgado’s place as a local hero. (He was dishing out some of most craved foods on the planet.) But when a man ran off with a young boy walking with his nanny along Manchester drive (near T2’s location), he gave chase in short order. A fast-thinker and a fast runner.

In an age where people seem to be more interested in recording crimes on their iPhones rather than intervening, Delgado chased the man for two blocks, cornered him, confronted him, and detained the perpetrator until the police arrived.

Delgado has a daughter that has special needs, so to show appreciation for his bravery, fans have started a GoFundMe account to help raise money for his daughter’s care.

It’s Taco Tuesday today, and a fine day to visit T2 Tacos and thank your taquero—that quiet, hard-working guy—for keeping an eye on you and your quesadilla.