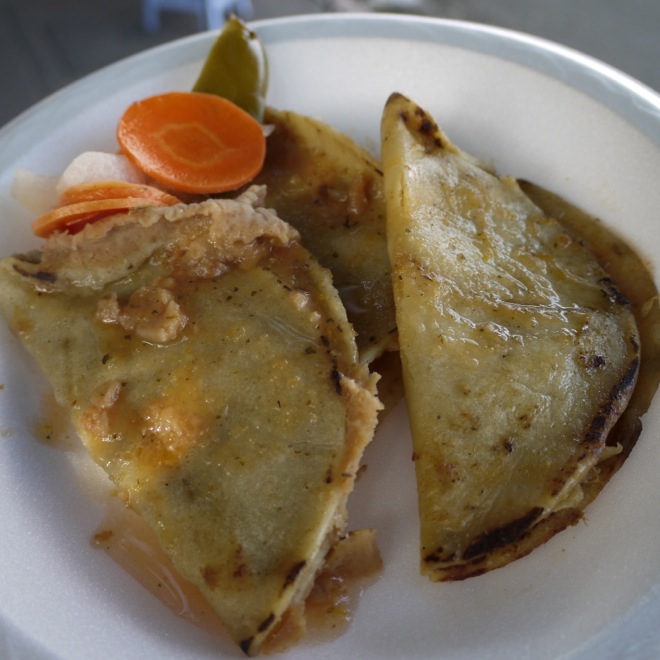 There has been a slow influx of tacos de canasta, or basket taco, vendors over the past five years. Tacos de canasta are a thinner style of taco, usually filled with refried beans, stewed chicharrones in green sauce, or a mash of potatoes with chorizo. They’re naturally steamed in a basket, which is where they get their name. Traditionally, the vendors—often from the Mexican state of Jalisco—prepare the tacos at home, stacking them and wrapping them in a towel inside of a basket, letting them steam while en route to their stand.

You can find tacos de canasta at the Mercado Olympic downtown, but at the El Faro Plaza in Vernon (across from the better known Alameda Swap Meet), there are at least five vendors selling these steamed treats, including my favorite: Tacos El Atoron.

Tacos de canasta—also known as tacos al vapor, and tacos sudados (sweaty tacos)—are one of the most common tacos found in Mexico. At El Atoron, they’re ordered six at a time for a mere $4, and they’re accompanied by lettuce, a salsa that’s squirted across the top, and some homemade spicy, pickled vegetables.

El Atoron’s chicharron tacos are the best of their offerings, with savory bits of braised chicharron and a sauce that seeps into the tortilla, leaving it moist, relaxed, and glistening like morning dew on the banks of Lake Xochimilco.