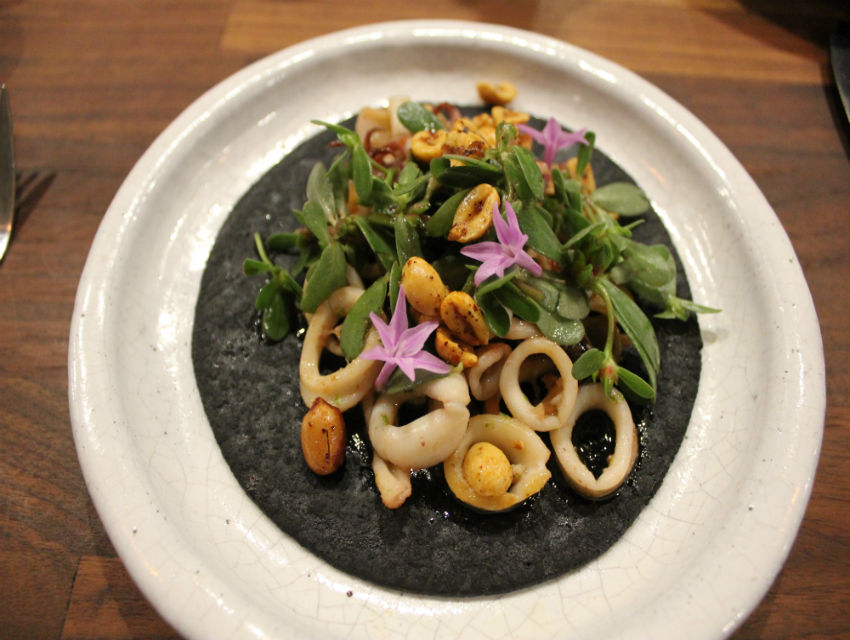 I don’t know if Costa Mesa’s Taco Maria needs another witty article on how they actually don’t serve tacos, but given chef Carlos Salgado’s choice to put taco in the restaurant’s name, I assume that he is prepared for this kind of daily tedium. Perhaps it’s a combination of Salgado’s playful demeanor and desire to provoke a conversation about Mexican cuisine that has driven this victimless crime. Once you’ve chance to try Salgado’s new tasting menu and you’ll easily forgive having been teased and lured in by the promise of tacos. But now, to be more confusing, Taco Maria does actually serve a taco on its tasting menu!

To be fair, Taco Maria serves tacos on handmade tortillas on their a la carte menu, 2 to an order for $14 to $16 using fine local ingredients. Another one of Salgado’s teachable moments—tacos will be served, but don’t expect any Taco Tuesday specials. Salgado is part of a young group of pocho (U.S. born Mexicans) chefs that are creating their own blend of California cuisine, chef skills and the traditional Mexican kitchens of their youth and creating a Mexican style of cooking born in Southern California: Alta California cuisine.

The only singular taco Salgado serves comes from his ambitious new tasting menu, a squid taco on a corn tortilla blackened by squid ink, black like the black corn tortillas made at markets in Guatemala. Despite its impressive appearance, the squid taco is a standard plating of main ingredient: squid with vegetables—raw purslane and spicy garlic flowers; and a whole peanut and chile de arbol salsa. It’s everything you want in a taco—big flavor, spice and textural contrast—and would look right at home in any modern Mexican restaurant in the Polanco, Condesa, or Roma neighborhoods of Mexico City.

Michelin Will Rate L.A. Restaurants This Year–But Does Anybody Actually Want That?

8 of the Very Best Margaritas in L.A.