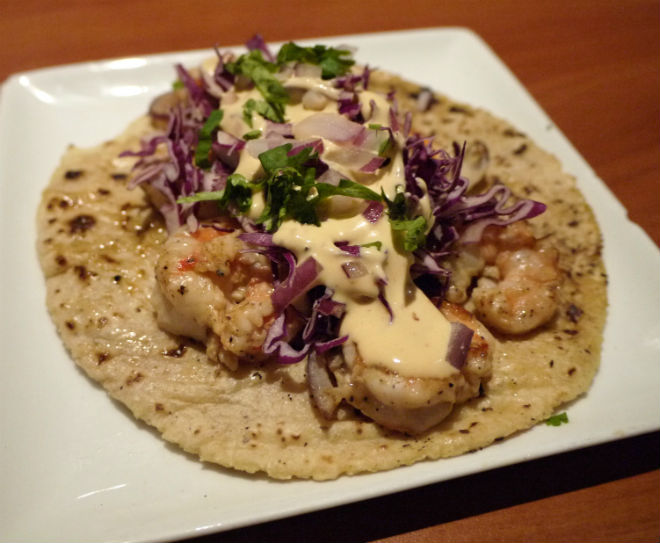 Chef Ricardo Diaz has been quietly leading L.A.’s home grown Mexican cuisine revolution since his original East L.A. food styling was introduced to us in 2008 at Cook’s Tortas.  He then excited taco enthusiasts with an elevated Mexican-American concept, Guisados—its popularity has sparked a franchise. The ever restless Diaz has moved on from those two restaurants, and taken his tacoing to the next level with the Colonia Taco Lounge. But it’s his Bizarra Capital, which he launched in late 2011, that still allows Diaz to shine.

Bizarra Capital is just a few weeks away from launching a spring menu, but don’t worry, some of your favorites will stay. I’m hoping those delicious and rare huauzontles (Mexican vegetable) remain on the menu, as well as the taco de camaron, or shrimp taco. There are few great shrimp tacos in town outside of the usual suspects, and that’s a damn shame—I mean, come on, this is California, dudes! Diaz offers a refreshing taste of the shrimp taco that will have you doubling down after the first bite.

The tortilla is excellent on Diaz’s shrimp taco, with lots of char as a base for buttery sautéed shrimp that snap just right under a velvety, smoky dressing of chile morita cream enhanced by loosely chopped purple onions, red cabbage, and cilantro. There’s no more reason to stress out on a Friday night when all your shrimp taco “go-to” trucks are fast asleep– just head out to Whittier where you can enjoy one of L.A.’s best shrimp tacos (not to mention best one of the best L.A. Mexican restaurants)—paired with an icy cerveza.