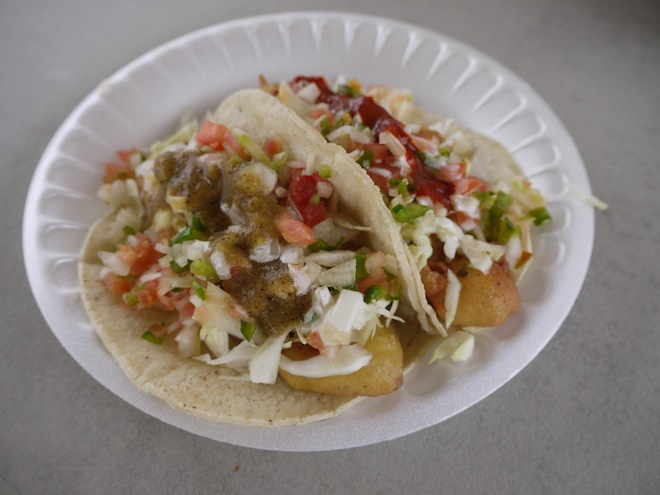 Maybe it was that fine SoCal afternoon when charming Ensenada native, Ricardo Piña first set up his homemade cart under a rainbow umbrella in Silver Lake, that L.A. street food experienced a seismic shift. The gourmet truck explosion was happening, and the legendary Breed Street collective of vendors was being driven into the abyss by the LAPD. Ricky is one of our first twitterized street food stars with a staunch traditional style of cooking combined with a key lime squeeze of social media dexterity.

After being shut down in Silver Lake, L.A.’s best fish taco man has found a temporary spot in Chinatown until his next big move, which will involve a Ricky’s Tacos Truck. He’s also recently set up shop at LAX. And we can’t wait for a more permanent fix, because Ricky makes the best fish taco north of the border.

His attention to every detail—flour from Ensenada, homemade crema agria (sour cream), and a carefully guarded beer batter recipe—is uncompromising. The batter is where most of the magic happens—Ricky doesn’t have dogfish (favored in Ensenada) at his disposal but he takes great care in marinating bass strips and then pinches a hole in the crisped batter while frying to allow hot oil to seep into the fish.

Add pico de gallo, crema, shredded cabbage, and one of three mouthwatering salsas to complete the tasty construction. Great fish tacos are the birthright of every Southern Californian, and every day—even when I don’t make it out to Ricky’s—I check my twitter feed, just as the evil queen in Snow White checks her mirror—“who has the best fish tacos in town?”—it’s Ricky’s!