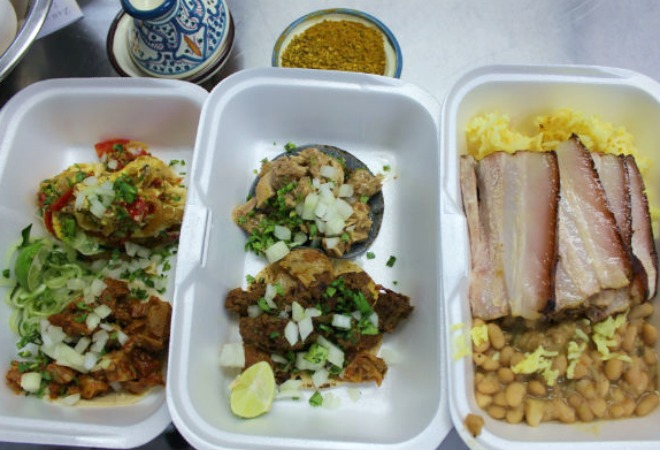 I have followed the itinerant chef, Farid Zadi, for years out of necessity—I often crave his brik (North African pastry filled with a cooked egg) which is easily one of my favorite egg dishes. In fact, there might not be a finer version in these United States. There’s no doubt chef Zadi has major chops in the kitchen—he is versed in French technique and is a true “chef’s chef”—especially when it comes to making delicious food inspired by his Algerian roots. Unfortunately, his restaurants have been short-lived these past couple of years, and have be unable to drawn a sustainable crowd befitting such a talented chef.

So when in doubt—taco up!

Zadi’s two-week-old Saturday pop-up in Koreatown’s Blank Kitchen, Revolucionario L.A. Food, is serving tacos that fuse together elements of Mexican and North African cuisine. So far, Zadi has been busy with followers and fans wanting to see what this revolución is all about.

The best thing about Revolucionario L.A. Food’s tacos are that they are essentially tacos de guisado, or tacos made with hearty stews and braised meats. Instead of especias mixtas (Mexican spice mix) though, Zadi is using his proprietary blend of ras el hanout (North African spice mix).  The stewed lamb is juicy, dripping with Zadi’s well-orchestrated spice tones that evoke a journey from the Old World to the New World.  Shakshouka tacos?—of course, the North African equivalent of huevos rancheros tastes right at home on a corn tortilla.

It’s anything goes on salsas and other condiments, made with whatever chiles Zadi feels like—ground chile from a Chinese market mixed with Japanese chile peppers were available during my visit. Most customers can’t seem to resist the many choices and opt for the entire condiment bar on the taco. No one protests. After all, as Zadi knows, Mexican practice dictates that the customer is always right when dressing their own taco.

This Is the Christmas Bar Making Our Spirits Brightest This Season

A Christmas-Themed Instagram Trap Opens in the Arts District