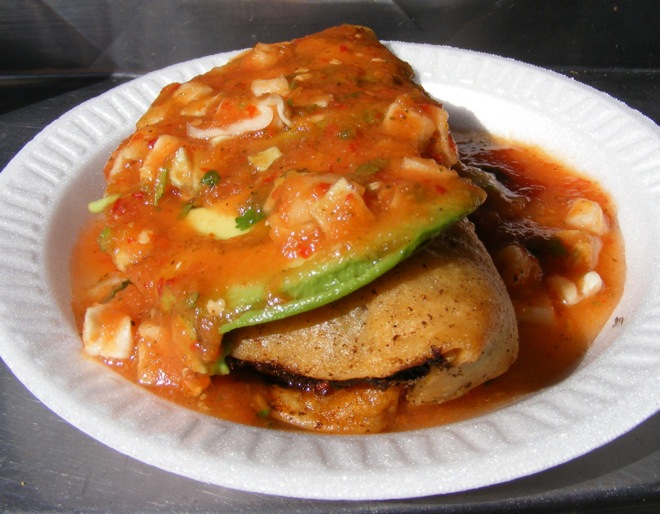 When I first reported on Mariscos Jalisco back in 2008, I was instantly certain that this was one of the top five taco—hell, top five street food—vendors in the City of Angels. Today, owner Raul Ortega’s famous taco dorado de camaron (fried shrimp taco) is at the top of everyone’s lists. That is, of course, unless you’ve never been. Ortega is old school when it comes to talking about his food, constantly shifting the story of origin and becoming visibly uncomfortable when you ask him anything about the taco. The taquero that works for him is said to have brought the recipe from San Juan de Los Lagos, Jalisco. It’s a special Lenten preparation of a flavorful shrimp mélange that’s cradled in a white corn tortilla and fried whole, then topped with an effervescent tomato and cabbage salsa topped with sliced avocado. As delicious as it is, you won’t find this is San Juan de Los Lagos, period. You will find their ceviche, but not this taco.

The Mariscos 4 Vientos truck parks just down the street—in front of one of the several restaurants also under their ownership in the neighborhood—and uses the same recipe and same menu as Mariscos Jalisco. Raul’s taquero previously worked there, and while they let him go, they held on to his recipes. But without his touch, I find their shrimp taco to be noticeably out of balance, with the salsa overwhelming its weak flavor and texture.

The fried shrimp taco is finding other homes as well. To the north is Mariscos El Jato (there’s a restaurant and a truck) run by relatives of Ortega, serving that same shrimp taco. Head west from Mariscos Jalisco and 4 Vientos on E. Olympic and you’ll run into Mariscos El Puerto, or head south on Soto and you’ll see the latest addition to the Boyle Heights shrimp taco rush: Mariscos El Hermano.

Slide south to Boyle and Slauson for a taste of taco irony at Baja Joe’s Mariscos, a new(ish) mall-food-court-style taqueria that advertises an “East L.A. fried shrimp taco.” This pocho entrepreneur has figured out something that Ortega has kept well hidden for years: that this is our taco now, it belongs to L.A. This is 100% Boyle Heights cuisine, an authentic home recipe brought here to flourish. And while you can easily do a shrimp taco run here and hit about ten different spots doing their own taco dorado de camaron, let me save you some time and energy: none will come close to Mariscos Jalisco’s.