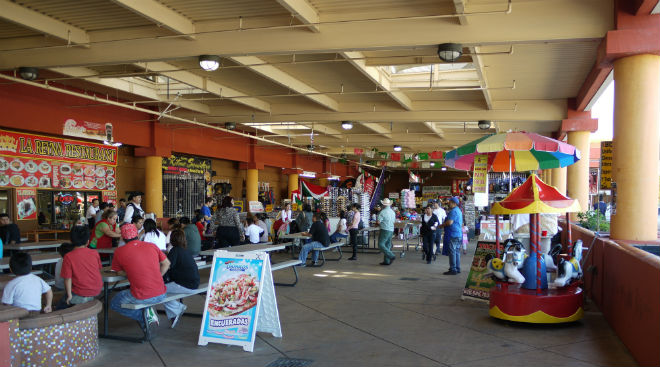 The Alameda Swap Meet has been a destination for adventure seeking food lovers for many years. Along with the Mercado Olympic (downtown), Plaza Mexico (Lynwood), and the Mercado de Los Angeles (Boyle Heights), better known as El Mercadito, it’s one of the city’s four major Mexican and Latino shopping centers.

A favorite among chefs, the Alamada Swap Meet is a fantastic place to shop for Mexican ingredients, cookware, and sundry swap meet trappings. Unfortunately, the food leaves much to be desired. That’s why I was amazed when I ventured across the street to the El Faro Plaza several years ago and stumbled upon a thriving Mexican food court with quality eats. Am I the only one who noticed this swap meet on the other side of the street?

Between the long patio of food stands and stalls—known as comedores in Mexico—and a smaller court of food stalls inside the El Faro Plaza, here are some places you can mainline Essential T until you drop.

Frutas Guadalajara: Traditional fruit cups covered in lime, salt, and powdered chile alongside strawberries and cream are served here, but if you want to really live as the natives—get tostilocos, a bag of tortilla chips covered in lime, Japanese peanuts, cucumber, pickled pork rinds, and chamoy or Valentina sauce.

Tacos El Atoron: This enterprising taco de canasta, or basket taco vendor, has been setting up stands inside and outside of the market for as long as anyone can remember. (It was featured on Essential T last year.)