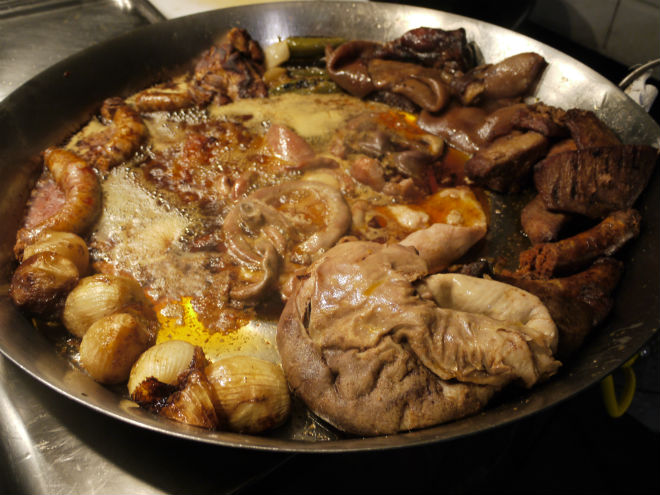 In addition to tacos al pastor, another recent surge within the street taco game are late-night tacos de fritanga, or fried protein tacos. These are everywhere from K-town to Boyle Heights and East L.A. at places like Tacos Arandas on Gage and Dozier, to South Central, and to the barrios surrounding Huntington Park where La Guera’s brisket tacos reign supreme.

The most serious tacos de fritanga scene is in Mexico City. There’s some good stuff in Jalisco too, and it’s found in most other states in Mexico, but only the Mexican capital has the range of offal and volume of vendors.

It’s kind of hard to mess up buche (hog’s maw). It’s naturally rich with flavor, and the product itself retains moisture with ease, but to find an estimable version in the States has been a challenge.

While out with a friend one night in South Central, we happened upon a no name stand at Florence and Avalon. There, a woman was running the comal de acero, or stainless steel disc with a well that runs around the perimeter and a convex center for searing the various piles of offal, chorizo, and other meats.

Hog maw is one of the tastiest parts of the pig. On this corner its juices drip; it’s like springy hog maw on steroids that’s served in palm-sized tacos, with sweet onions and toritos, or grilled jalapeño chiles. This is the best way to cook buche. It shouldn’t be prepared on a flat top like at so many of our Mexican-American loncheras Smooth and juicy, it’s so delicious you’ll forget you’re eating a pig’s esophagus.

How One Woman Is Fighting Food Insecurity In L.A.’s Low-Income Communities