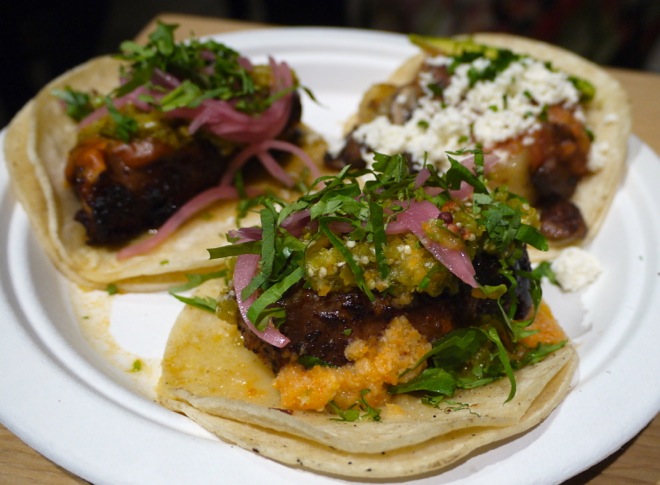 Avila is a pocho (Mexican-American) chef who takes to slangin’ tacos when he’s not working as sous chef for Gary Menes at Le Comptoir. (He was formerly at Church & State, and Palate Food + Wine.) Avila’s new foray into street tacoing is a true labor of love; he’s been doing taco runs into Baja, when time allows, to keep his taco game sharp and inspired.

I ordered a pair of his pork tacos without hesitation—all in! The tacos, made with pig ear and caul fat wrapped pork shoulder, were dressed with a tomatillo salsa and a brush of chile de arbol and chile morita salsa. Although I would have preferred the pork to be sliced before it’s put in the tortilla, the rush of pork juices and formidable salsas splashing around in my mouth took my mind off of that pretty quickly. The second pork-on steroids-taco had a couple of spoonfuls of Avila’s habanero salsa, which is a beast. A cloud of pain sets your eyes to tearing, coursing through your pours and membranes; if you can hold out for a couple of minutes it’ll pass, and you will be rewarded with capsaicin bliss.

The vegetable taco of potatoes and mushrooms cooked with fresh thyme was excellent, too. Avila has come out far ahead of the L.A. taco rush of the past few years—his tacos have a perfect balance of moisture, which is of paramount importance. His fillings are bangin’ and the salsa technique is street pro status.

There is still room for improvement though: Guerrilla Tacos must stop using GRUMA brand tortillas. It makes little sense to shop for ingredients at the farmers’ market, only to wrap them in the Milli Vanilli of tortillas. [UPDATE BELOW] And, cotija cheese has no business on a taco; it’s for enchiladas or other antojitos that are covered in sauce. It’ll dry up those fantastic guisados you’ve worked so hard on, chef.

Those two things aside, chef Avila is bringing one of the most promising taco concepts by a non-traditional vendor here in the City of Angels, and he’s determined to be the best. ¡Hasta la victoria, siempre!

Avila sets up outside of Handsome Coffee Roasters and Café Dulce Pop/Hold Up; check the Guerrilla Tacos Facebook or Twitter accounts for the current schedule and menu updates.

[UPDATE via Twitter: Guerrilla Tacos informs us that they’ve upgraded their tortilla game, now getting their tortillas from La Princesita Tortilleria.]

Just an #FYI I’ve switched over to a much better #tortilla from #eastlos #mama y #papa #princesita twitter.com/guerrillatacos…