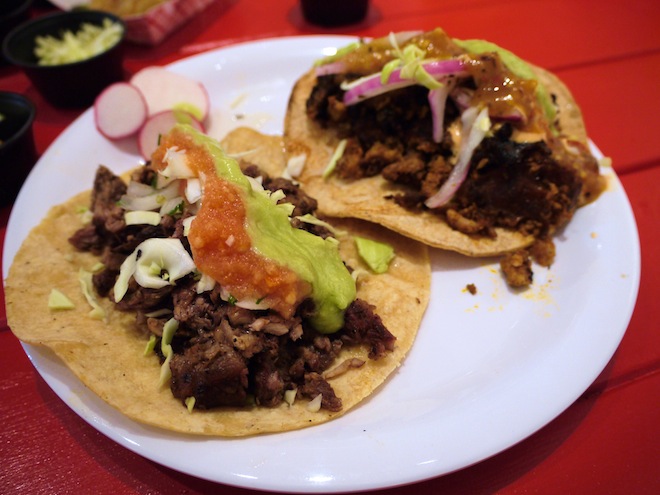 As I broke it down in our guide to global grilling, carne asada must be cooked on fire, not on a flat top, as it’s usually done here at L.A.’s taquerias, Mexican restaurants, and loncheras (food trucks). Carne asada is the state dish in Sonora, where fresh Angus steaks are grilled on mesquite, chopped, and then placed into handmade flour tortillas. Then, they’re dressed up with layers of salsa, guacamole, shredded cabbage, and pico de gallo.

Sinaloa also has good steaks, and so do several other northern states. And then there’s Baja California, where you have a Tijuana style of carne asada in which they use corn tortillas and rely heavily on Pueblan taqueros. In Mexicali, which draws its tradition from Sonoran transplants, the meat is prepared in less rigorous a fashion so that it appeals to the more relaxed cachanillas (people from Mexicali).

There are many vendors from Tijuana around town doing asada on mesquite, but Esdras Ochoa and Javier Fregoso, the duo behind Mexicali Taco Co., consistently deliver wonderfully fire-roasted sirloin steaks that are sliced thin, salted, are then cooked over a flame. While I dream that one day I’ll walk in and see a bed of white coals lit in their kitchen, Mexicali makes the real deal over an open (though gas-powered) flame.

You can get their mouth-watering carne asada, always tender, on a flour tortilla they actually import from Mexicali (don’t waste time with domestic flour tortillas), or in one of their original creations. The vampiro—a garlic-laced quesataco (melted cheese with meat)—is a favorite, as is their cachetada, or head slap, which is technically a vampiro (meat tostada with cheese).

Sure, you can follow our grilling guides and do this at home. But for when you just want to relax, head to Mexicali Taco Co. and let them do the grilling for you.